The Rubiton Stakes is a Group 2 event hosted at Caulfield Racecourse in February on CF Orr Stakes Day during the Melbourne Autumn Racing Carnival. 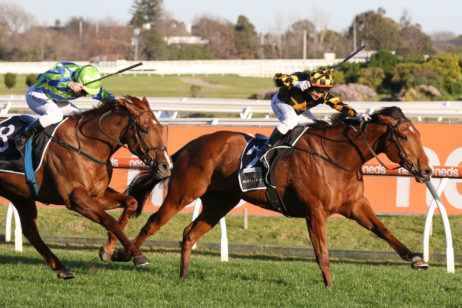 The Rubiton Stakes (1100m) is a Group 2 race held at Melbourne’s Caulfield Racecourse in early – mid February each year.

Open to all horses of all ages, the Rubiton Stakes is raced under Set Weights plus Penalties conditions and offers $300,000 in total prize money.

Run on the first Group 1 race meeting of the Melbourne Autumn Racing Carnival – CF Orr Stakes Day – the Rubiton Stakes shares the card with a host of other Group status races:

The latest Rubiton Stakes 2022 betting odds will be provided below the week of the race so stay tuned.

The 2022 Rubiton Stakes field and barriers are set for release on the Wednesday of race week and will be published in full below.

A small line-up of just eight sprinters face off in the Rubiton Stakes 2022 final field including the returning Artorius who ran third in both the Caulfield Guineas and Coolmore Stud Stakes last time in.

Below you can find Rubiton Stakes results since 2000.