The Coolmore Stud Stakes is a Group 1 sprint down the Flemington straight for three-year-olds held on the Saturday before Melbourne Cup Day as part of Victoria Derby Day. 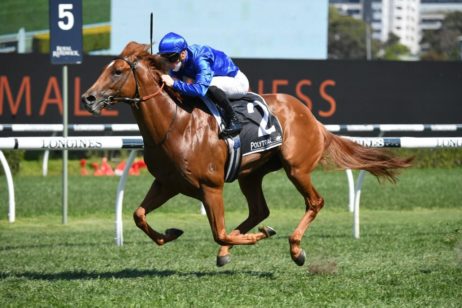 The Coolmore Stud Stakes, formerly known as the Ascot Vale Stakes, is a Group 1 sprint race for three-year-old horses.

This 1200m set weights race has undergone plenty of changes in the past few years as it has elevated into the premier sprint race for the youngsters during the annual Melbourne Cup Carnival in late October or early November each year. Worth $1.5 million in prize money, the race attracts mainly colts looking to increase their stallion value at stud.

The 2021 Coolmore Stud Stakes runs as part of Victoria Derby Day at Flemington on Saturday October 30, 2021.

The official Coolmore Stud Stakes 2021 results and finishing order will be updated here once the event takes place on 2021.

September Run ($4 in 2020) was the last favourite in Coolmore Stud Stakes betting to salute for the punters.

The official Coolmore Stud Stakes 2021 Final Field & Barriers will be released by Racing Victoria on the Wednesday leading-up to Derby Day and published in full below.

The Coolmore Stud Stakes 2021 Nominations close the Monday of race week and the full list of early entries for the Group 1 sprint will be published in full below as soon as announced.

The sprint race is held on the same day as the Victoria Derby, Mackinnon Stakes and Myer Classic. First held in 1933 when Shakuni won, the race has been claimed by some of the most famous sprinters in Australia. In 1978, Manikato added the Ascot Vale Stakes to his list of victories.

Prior to 1965 the Coolmore Stud Stakes was an Autumn Carnival event for two year olds.

In the table below you will find the top 3 placegetters and Coolmore Stud Stakes winners from the year 2000 to present.

The stage is set for one of the most intriguing and exciting recent editions...

A super line-up of 12 sprinters face off for Australian racing’s biggest prize...

Incentivise remains the firm favourite in Caulfield Cup 2021 betting this...

A date facing off against super stayer Incentivise in the Caulfield Cup field...