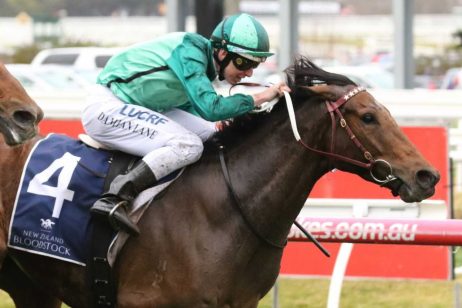 In 2020 the John F. Feehan Stakes winner, dual Cox Plate placegetter Humidor, went on to run second in that year’s Underwood Stakes results and third in the Group 1 Caulfield Stakes.

The John F. Feehan Stakes 2021 ran on Saturday September 4, 2021 and was won by the Danny O’Brien-trained Superstorm.

The Danny O’Brien-trained Superstorm ($6) was given a masterful rails-hugging ride by Damien Oliver, the hoop celebrating his fourth win in the 2021 Feehan Stakes results aboard the now Cox Plate-bound Perth expat.

Click here to read more on the thrilling inside run of Superstorm in the 2021 Feehan Stakes.

The season’s best John F. Feehan Stakes 2021 odds and betting market links on the Cox Plate qualifier will be available for punters below the week of the race.

The official John F. Feehan Stakes 2021 Field & Barriers are announced by Racing Victoria on the Wednesday leading-up to the event, the full list of potential Cox Plate horses to be published below.

The 2021 Feehan Stakes final field features 14 weight-for-age hopefuls led in betting by $5 million The All-Star Mile runner-up from 2020 Superstorm in gate five and Sierra Sue in gate two looking for her third win on the trot.

Click here to read more on the key chances in the Feehan Stakes 2021 field and betting markets.

Nominations for the John F. Feehan Stakes in 2021 close the Monday of race week and will be published in full below once announced.