The QTC Cup is now known as the Moreton Cup and runs during the Brisbane Winter Racing Carnival on Queensland Oaks Day. 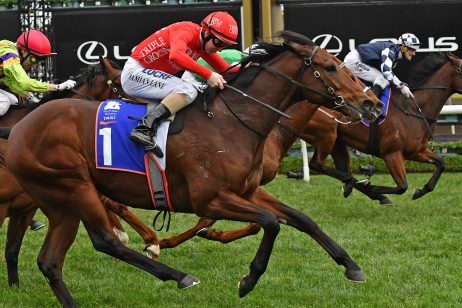 Held on the Queensland Oaks Day, the Group 2 QTC Cup is now known as the Moreton Cup and is one of the key Group status races on the card held at Eagle Farm Racecourse in late May or early June during the Brisbane Winter Racing Carnival.

In 2021 the Moreton Cup retained the 1200m distance but returned to Eagle Farm to run on Queensland Oaks Day. The other features on the program are the Group 1 Queensland Oaks for the three-year-old fillies and the $500,000 Group 3 Sapphire Stakes, formerly known as the Glenlogan Park Stakes.

The Moreton Cup 2021 ran at Eagle Farm Racecourse on Saturday June 5, 2021 and was won in an upset by the Tony Gollan-trained Baller.

The Tony Gollan-trained Baller ($13) was impressive the final furlong racing away late to defeat roughie hope Zaniah ($26) by over two lengths in the 2021 Moreton Cup results on Oaks Day.

The Moreton Cup 2021 betting odds and market links to Ladbrokes.com.au on the old QTC Cup race will be provided for punters below as soon as available.

The Moreton Cup field attracts a smart line-up of winter sprinters that may have had a lead-up run earlier in the Brisbane Winter Racing Carnival in a race like the Group 3 BRC Sprint (1350m) at Doomben a fortnight before and is announced the Wednesday of race week.

The 2021 Moreton Cup field features just nine final acceptors led in betting by the rails-drawn Splintex for Mark Newnham, the horse coming off a close sixth when only 1.5 lengths off Eduardo in the Group 1 Doomben 10,000.

Click here to read more on the key chances in the Moreton Cup 2021 field and betting markets.

The official Moreton Cup 2021 nominations close the Monday leading-up to Queensland Oaks Day and will be released below once early entries are taken by Racing Queensland.