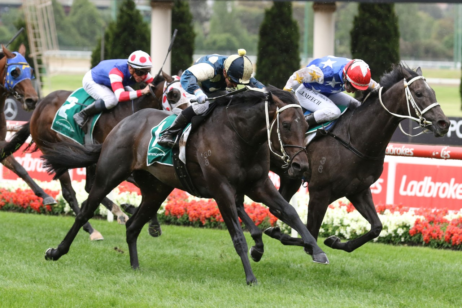 The Moonee Valley Vase is a staying race run over 2040m by three-year-olds at set weights and is worth $300,000 in total prize money. Runners may have previously contested some of the other set weights races for three-year-olds earlier in the carnival including the Group 3 Caulfield Classic (2000m) on Caulfield Cup Day or Group 2 Stutt Stakes (1600m) at Moonee Valley in late September.

The Moonee Valley Vase is commonly used as a final preparation race for horses moving on to one of the highlight events of the carnival, the prestigious Group 1  Victoria Derby (2500m) held the following week at Flemington.

Some fillies that contested the Vase may instead choose to run in the Group 2 Wakeful Stakes also on Derby Day because of its more suitable 2000m distance.

In 2019 MV Vase winner Soul Patch went on to run third in that year’s Victoria Derby trifecta and the following year’s Group 1 Australian Guineas. The next season, Johnny Get Angry improved on his lead-up third in the Moonee Valley Vase to win the Victoria Derby 2020 at big odds.

The 2021 Moonee Valley Vase took place Ladbrokes on Cox Plate Day – Saturday October 23, 2021 and was narrowly won by the $2 favourite Forgot You.

There was nearly a massive boilover in the Moonee Valley Vase 2021 result with 100/1 shot Commander Harry tearing away to lead a long way out from home before being ground down late by his $2 favourite stablemate Forgot You in a quinella for the Busuttin/Young stable.

Click here to read more on the exciting win by Derby-bound Forgot You in the 2021 Moonee Valley Vase.

The official Moonee Valley Vase 2021 Field & Barriers are announced on the Wednesday of race week and will be published in full below.

The 2021 Moonee Valley Vase nominations are released on the Monday of Cox Plate week, the full list of early entries for the VRC Derby lead-up to be announced below once announced.

First run in 1983, the first Moonee Valley Vase winner was Centaine when it began as a Listed race run over 1600m. A few years later in 1986 the race distance increased dramatically to 2040m. Following that, in 1989 it was elevated to Group 3 status and then in 1997 the Moonee Valley Vase became a prestigious Group 2 event.

Moonee Valley Vase results since 2000 can be found below.