The Blamey Stakes is a Group 2 race held at Flemington on Australian Guineas Day. 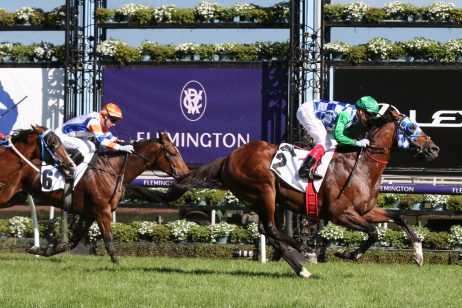 The Blamey Stakes is a Group 2 set weight and penalties race held at Flemington Racecourse in late February or early March as part of Australian Guineas Day at HQ. Raced over a 1600m distance, the Blamey Stakes is worth $200,000 in prize money during the Melbourne Autumn Racing Carnival. Good lead-up races to the Blamey Stakes include the Group 3 Carlyon Cup (1400m) and the Group 1 Futurity Stakes (1400m).

The Blamey Stakes now runs as the key support race at the Australian Guineas Day meeting having previously been run the weekend later on ‘Super Saturday’ alongside the Group 1 Newmarket Handicap and the Group 1 Australian Cup.

Dual Blamey Stakes champion Fifty Stars (2019, 2020) was the last horse to do the Blamey Stakes – Australian Cup double in 2020. Fifty Stars also returned in 2021 and narrowly missed out on a third victory when runner-up to Star Of The Seas.

It can prove a lead-up for horses heading up to Sydney for ‘The Championships’ races including the Group 1 Doncaster Mile (1600m) and the Group 1 Queen Elizabeth Stakes (2000m) on the first two Saturdays of April at Royal Randwick.

The Blamey Stakes 2021 betting odds complete with links to Ladbrokes.com.au will be available for punters below during the autumn.

Fifty Stars ($2.70 in 2020) for his second success became the latest favourite in Blamey Stakes betting to salute for the punters.

The Blamey Stakes field attracts some of the top milers that are currently on the racing circuit. As a relatively major autumn feature race held towards the end of the Melbourne-based action that time of year, the Blamey Stakes field is usually filled out with quality types that could be Sydney bound next race.

Following a run in the Blamey Stakes field, horses may head to Royal Randwick in April’s ‘The Championships’ for a shot at something like the Group 1 Doncaster Mile (1600m) that the 2018 Blamey Stakes winner Palentino ran fourth in or the lucrative Group 1 Queen Elizabeth Stakes (2000m).

The 2021 Blamey Stakes field and barriers are set for release on Wednesday February 24, 2021 and will be published in full below.

Nominations for the Blamey Stakes in 2021 close the Monday of race week and will be updated in full below once announced.

The 2021 Blamey Stakes nominations feature 21 potential runners – a number of which also hold entries for the Sydney races on the same day at Randwick – led in early betting by the spring’s Toorak Handicap runner-up Buffalo River.