The Wakeful Stakes (2000m) is a Group 2 event hosted at Flemington Racecourse on Derby Day as a lead-up to the VRC Oaks. 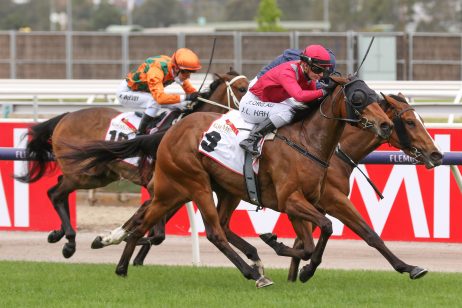 The Wakeful Stakes is a Group 2 race for three-year-old fillies contested at Flemington Racecourse.

Held the Saturday before the illustrious Melbourne Cup in late October or early November annually, the Wakeful Stakes is one of 9 Group status races that fill the card on Victoria Derby Day. VRC Derby Day is one of the only race meets in Australia where every race has Group status. There are four Group 1 races on the card: the Victoria Derby (2500m), Kennedy Cantala (1600m), Coolmore Stud Stakes (1200m) and Empire Rose Stakes (1600m).

The Wakeful Stakes results have been a good indication for the VRC Oaks over the years, with 14 fillies taking out the double since 1983, including most recently Kirramosa (2013), Aristia (2018) and Miami Bound (2019).

The progressive Tony & Calvin McEvoy-trained Victoria Quay ($7) was eye-catching late in a fighting finish down the outside with the filly ridden to a narrow win over the favourite Personal ($3F) thanks to a gun ride by Jamie Kah. She will bypass the Kennedy Oaks and be saved for the Group 1 SA Oaks back home next winter.

Click here to read more on the 2020 Wakeful Stakes win by Victoria Quay.

The top Wakeful Stakes 2020 odds and market links to the betting markets at Ladbrokes.com.au on the VRC Oaks lead-up race will be provided below the week of the race.

The Wakeful Stakes field attracts a host of three-year-old fillies looking to back-up the next Thursday into the VRC Oaks field. Fillies competing in the Wakeful Stakes field may come via a number of earlier carnival races including the Group 2 Moonee Valley Vase (2040m) on Cox Plate Day the week before, the Group 2 Edward Manifold Stakes (1600m) or the prestigious Group 1 Thousand Guineas (1600m).

The official Wakeful Stakes 2020 Field & Barriers are announced by Racing Victoria on the Wednesday before the race and will be provided in full below.

The Wakeful Stakes was first run in 1932 when Protea won the inaugural race. It started as a principal event run over ten furlongs and remained the same until 1973 when the distance was converted into 2000m with Australia’s adoption of the metric system. In 1979 the Wakeful Stakes was elevated to Group 2 status.

Many fine fillies have contested the race and high quality Wakeful Stakes winners include Miami Bound (2019), Aristia (2018), Zarita (2007) and Tuesday Joy (2006). Wakeful Stakes results, winners and placegetters since 2000 are listed below.