The McEwen Stakes is a Group 2 race held at Moonee Valley Racecourse in early September as a lead-up to the Moir Stakes the following month. 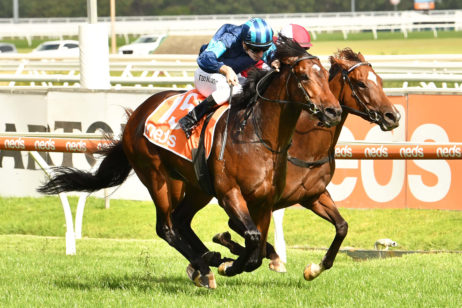 The McEwen Stakes is a Group 2 sprint held during early September at Moonee Valley Racecourse. Raced over 1000 metres under weight for age conditions, the McEwen Stakes pays $300,000 in total prize-money as of 2021.

In recent years the 2016 McEwen Stakes winner Wild Rain went on to run third in the Moir Stakes, while the year before the great grey Chautauqua (2015) completed the McEwen Stakes – Manikato Stakes double.

The 2021 McEwen Stakes form was franked with the winner The Inferno running second next-up in the Moir Stakes, while the third-placed mare September Run returned the following autumn to win the Group 1 William Reid Stakes in 2022.

The season’s best Mitty’s McEwen Stakes 2022 betting odds will be provided for punters below the week of the race.

The official McEwen Stakes 2022 Final Field & Barriers are released by Racing Victoria on the Wednesday leading-up to Feehan Stakes Day, the line-up of sprinters to be published in full below.

Nominations for the Mitty’s McEwen Stakes in 2022 are taken on the Monday of race week.

Registered as the Ian McEwen Trophy, the McEwen Stakes was inaugurated in 1995, making it a relatively young race. The McEwen Stakes was named in honour of Ian McEwen, a former secretary for the Moonee Valley Racing Club. For the very first year it ran, the race was referred to as the Anniversary Trophy.

In 2018 the McEwen Stakes winner Nature Strip set a new record winning in a slick 56.95 seconds.

McEwen Stakes results since 2000 are listed below.