The Matriarch Stakes is a Group 2 staying event for mares held at Flemington Racecourse on Stakes Day at the end of the Melbourne Cup Carnival. 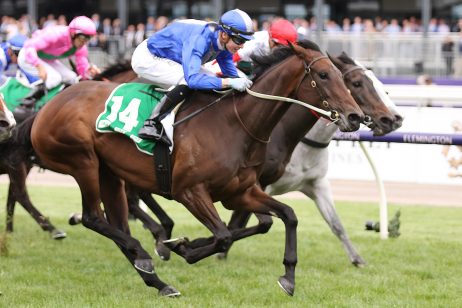 Mackinnon Stakes Day marks the end of the four day Melbourne Cup Carnival and many of runners from the Matriarch Stakes will go on to compete in the Group 2 Zipping Classic (2400m) or the Group 3 Eclipse Stakes (1800m) the following Saturday at Sandown Racecourse.

The 2020 Matriarch Stakes ran on Mackinnon Stakes Day, Saturday November 7, 2020 , and was won by Affair To Remember.

See below for the latest Matriarch Stakes 2020 betting odds, markets out as soon as the field is released during Melbourne Cup week 2020, complete with links to Ladbrokes.com.au to back your Matriarch Stakes Tips.

The Matriarch Stakes Field attracts classy mares out of lead-up races like the Group 1 Empire Rose Stakes (1600m) at the track the Saturday prior and even the Group 1 Caulfield Cup (2400m) the month before, which Lucia Valentina (2015) improved on a lead-up ninth in to win the Matriarch Stakes.

The 2020 Matriarch Stakes field and barriers are announced by Racing Victoria on the Wednesday of race week, the full list of mares facing off in the set weights plus penalties clash to be published below once released.

Originally a Listed race, the Matriarch Stakes was elevated to Group Three status between years 2001 to 2004 and in 2005 it was finally given Group Two status. The race was not held in 2005.

Inaugurated in 1981, the Matriarch Stakes has acquired a reputation for producing some quality winners. Notable Matriarch Stakes winners include Castilla (1982), Flawlessly (1991, 92, 93), Starine (2001) and Ventura (2009). Matriarch Stakes results, place getters and winning times since 2000 are provided below.