The Guy Walter Stakes is a Group 2 race run on Chipping Norton Stakes Day during the Sydney Autumn Racing Carnival for mares only. 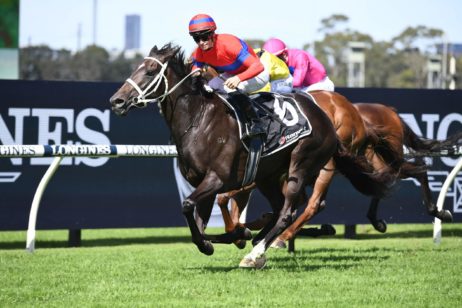 The Guy Walter Stakes is a Group 2 middle distance sprint for mares aged four-years-old and above run on Chipping Norton Stakes Day at Randwick Racecourse in late February or early March during the Sydney Autumn Racing Carnival.

Formerly a Group 3 event, in 2017 the 1400m set weights plus penalties clash is upgraded to Group 2 status and offers $200,000 in prize money. The Wiggle Stakes was renamed as the Guy Walter Stakes from 2015 in honour of late trainer Guy Walter who prepared 36 Group 1 winners over his career.

The meeting’s marquee races are the Group 1 Chipping Norton Stakes (1600m) run over the mile under weight-for-age conditions, along with the recently upgraded Group 1 Surround Stakes (1400m) for three-year-old fillies. Other features on the program include the Group 2 Sweet Embrace Stakes (Fillies) and Group 2 Skyline Stakes (Colts & Geldings) for Golden Slipper Stakes-bound two-year-olds.

Mares may come into the Guy Walter Stakes field via a number of earlier autumn lead-ups including the Group 3 Geoffrey Belmaine Stakes (1200m) in Melbourne a fortnight earlier or either the Group 3 Triscay Stakes (1200m) or Group 2 Apollo Stakes (1400m) on the same day at Royal Randwick in Sydney. Alassio (2019) was the last mare to complete the Triscay Stakes – Guy Walter Stakes double.

Other recent Coolmore Classic winners to come off a run in the Guy Walter Stakes include Dixie Blossoms (2nd in 2019) and Peeping (3rd in 2016).

Looking further ahead of the Autumn Racing calendar events like the Group 2 Emancipation Stakes (1500m) at Rosehill on Tancred Stakes Day Day and Group 1 Queen Of The Turf Stakes (1600m) during April’s ‘The Championships’ shape up as nice targets for the mares out of the Guy Walter Stakes.

The form out of the 2021 Guy Walter Stakes results were franked that spring with the third placegetter Icebath winning the inaugural edition of the $2 million The Invitation race.

Check out the full Guy Walter Stakes 2022 Results and Finishing Order below once the race is run on Chipping Norton Stakes Day this autumn in the lead-up to the Coolmore Classic.

The autumn’s Guy Walter Stakes 2022 betting odds will be provided below the week of the race with market links to Ladbrokes.com.au.

Dixie Blossoms (2018) in her successful title defense was the last favourite in Guy Walter Stakes betting to win.

Each autumn the Guy Walter Stakes field attracts a class line-up of mares eyeing runs in tougher races over the coming weeks, and is released on the Wednesday before Chipping Norton Stakes Day.

The official 2022 Guy Walter Stakes field and barriers are set for release by Racing NSW on the Wednesday of race week and will be published in full below.

A dozen quality mares make-up the Guy Walter Stakes 2022 final field for Sydney on Saturday led in betting by the spring’s $2 million The Invitation winner Icebath.

Early nominations for the Guy Walter Stakes in 2022 are taken the Monday ahead of the Group 2 showdown and will be listed below once announced.

Prior to 2005 it was also open to three-year-old fillies, but is now restricted only to mares aged four-years-old or over. It has run under its current set weights plus penalties conditions since 2012.