The Golden Pendant is a Group 2 event for fillies and mares held at Rosehill Gardens Racecourse in September as part of Golden Rose Stakes Day. 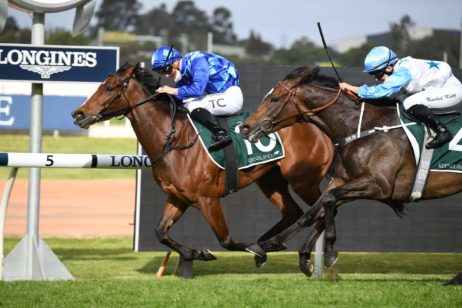 The Golden Pendant is a Group 2 middle distance sprint held at Rosehill Gardens Racecourse in Sydney. The Golden Pendant was previously known as the Research Stakes and now takes place on Golden Rose Stakes Day.

Held in late September during the Sydney Spring Racing Carnival, the Golden Pendant has rapidly grown into a major target for fillies and mares each season due to the boosted stakes on offer.

Following the Golden Pendant, the course taken by horses depends entirely on their success in the race and their spring campaign plans.

The Golden Pendant shares the program with a host of other Group status races including the meeting’s marquee race, the Group 1 Golden Rose Stakes (1400m) for three-year-olds. The other feature event on the card is the Group 2 Shannon Stakes (1500m) for Epsom Handicap-bound gallopers.

Any four-year-old mares out of the Golden Pendant may head towards the $7.5 million The Golden Eagle (1500m) in November, a race the 2019 Golden Pendant winner Mizzy ran third in the inaugural edition in to Kolding.

The 2021 Golden Pendant ran on Saturday September 25, 2021 and was won by all-the-way champion Vangelic in her first victory since a successful debut back in January of 2020.

The Gai Waterhouse & Adrian Bott-trained multiple Group 1 placegetter Vangelic ($7) finally broke through for her first win since January of 2020 with an all-the-way success in the 2021 Golden Pendant results ahead of a potential invite into the $2 million The Invitation race.

Click here to read more on the gutsy victory by Vangelic in the Golden Pendant 2021.

The spring’s best Golden Pendant 2021 odds and betting market links to Ladbrokes.com.au on the Group 2 race for fillies and mares will be available below the week of the race.

The Golden Pendant field attracts a quality line-up of fillies and mares each season, many of which come out of either the Group 3 Sheraco Stakes (1200m) at the track a fortnight earlier or from a run against the boys in the Group 2 Theo Marks Stakes (1300m) on the same lead-up program.

The official Golden Pendant 2021 Final Field & Barriers will be released by Racing NSW on the Wednesday leading-up to the race and will be published in full below.

The 2021 Golden Pendant field features a quality line-up of potential Group 1 bound fillies and mares dominated by the Jamie Richards-trained Entriviere chasing her fifth win in six starts and second on the trot after a first-up win in the Sheraco Stakes.

Click here to read more on the key horses in the Golden Pendant 2021 field and betting markets.

The 2021 Golden Pendant nominations close on the Monday leading-up to Golden Rose Stakes Day and will be available right here once early entries are released.

Originally known as the Research Stakes, the Golden Pendant was named after 1989 Australian Champion Racehorse of the Year, Research. As a three year old, she was the only filly to win the ATC Derby-ATC Oaks double (four days apart). Her 1988 season as a three year old saw Research take out the majority of three-year-olds only races. At four years old, Research dropped off somewhat in skill, and is largely remembered for her three year old season.