The Dane Ripper Stakes is a Group 2 race for fillies and mares run in Brisbane on Stradbroke Handicap Day as a lead-up to the Tattersall's Tiara. 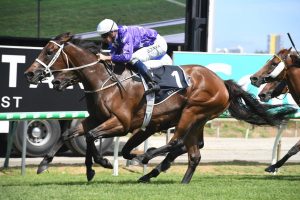 The Group 2 Dane Ripper Quality, now known as the Dane Ripper Stakes, is one of the feature races traditionally held on Stradbroke Handicap Day at Eagle Farm Racecourse during the annual Brisbane Winter Racing Carnival.

Conducted on a Saturday in early-mid June, the 1400m set weights plus penalties showdown for fillies and mares is worth $200,000 in prize money and is one of a host of Group support acts on the richest race day of the carnival.

The meeting is headlined by the Group 1 Stradbroke Handicap, Queensland Derby and JJ Atkins. The Dane Ripper Stakes meanwhile is one of three Group 2 races on the program along with the Brisbane Cup for the stayers and Queensland Guineas for the three-year-old milers.

A nice lead-up race to the Dane Ripper Stakes is the Group 3 Glenlogan Park Stakes (1300m) at Eagle Farm a fortnight earlier, while contenders may also come out of races like the Group 3 Proud Miss Stakes (1200m) in Adelaide.

Fillies & mares that run well in the Dane Ripper Stakes usually back-up at the end of the month in the Group 1 Tattersall’s Tiara (1400m) over the same track and distance, which is the last major race of the Queensland Winter Racing Carnival. The Dane Ripper Stakes – Tattersall’s Tiara has been achieved in recent years by Red Tracer (2013) and Cosmic Endeavour (2014).

The Dane Ripper Stakes 2019 Results saw Chris Waller’s classy five-year-old Invincibella go back-to-back in the Stradbroke Day event , the first dual winner of the race since the also Waller-trained Red Tracer (2012-13). It was a tight finish in the race, but jockey James McDonald gave Invincibella a gun ride and the mare was too strong late holding off the charge from $34 roughie Platinum Angel who came close to an upset. The 60kg top weight from the Waller stable Prompt Response was also brave rounding out the trifecta in third.

Read more on the 2019 Dane Ripper Stakes victory by the defending champion Invincibella.

The winter’s top Dane Ripper Stakes 2019 betting odds on the Tattersall’s Tiara lead-up will be available below complete with market links to Ladbrokes.com.au the week of the race.

The Dane Ripper Stakes field attracts a strong line-up of the season’s top middle-distance fillies and mares that are traditionally eyeing a Group 1 run in the Tattersall’s Tiara field later in the month.

The official Dane Ripper Stakes 2019 Final Field & Barriers will be available below on the Wednesday of Stradbroke Handicap Day week.

The 2019 Dane Ripper Stakes Field is now out featuring a dozen fillies and mares led in the weights by the Chris Waller-trained Prompt Response (60kg). Waller has a trio of runners in the mix, while likely favourite Con Te Partiro coming off the lead-up Dark Jewel Classic win at Scone has drawn midfield in gate seven.

The Dane Ripper Stakes 2019 Nominations close the Monday of race week and will be published in full below once released by Racing Queensland.

Inaugurated in 2003, the Dane Ripper Stakes was originally a Listed race.

The high class of mainly locally-trained fillies and mares attracted to the winter feature however saw it gain Group 3 status in 2006.

Three years later in 2009 the event, named in honour of champion 1997 Cox Plate winner Dane Ripper who was prepared by Bart Cummings, became a Group 2 feature and since then has continued to draw quality fields. In 2017 the race took place over 1350m at Doomben with Eagle Farm not declared fit for racing.