The TJ Smith Stakes is a Group 1 sprint run at Royal Randwick on Day 1 of The Championships during the Sydney Autumn Racing Carnival. 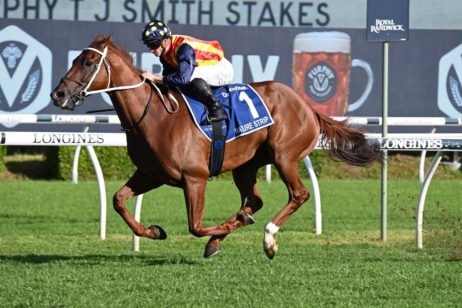 *In 2021 the TJ Smith Stakes ran on the second Saturday of April with all race meetings of the autumn in Sydney from Slipper Day onwards postponed a week due to the weather.

For the 2020 edition, the TJ Smith Stakes prizemoney was reduced to $1.25 million to help reduce the financial impact of the COVID-19 pandemic, but was back up to $2.5 million again in 2021.

This race should not be confused with former The TJ Smith, a Group 1 race run in June during the Brisbane Winter Racing Carnival for two-year-olds, now called the JJ Atkins.

The 2019/20 Australian Racehorse of the Year Nature Strip enjoyed back-to-back wins when successfully defending his title in the 2021 TJ Smith Stakes ahead of his $15 million The Everest win that spring in the world’s richest turf race.

The 2022 TJ Smith Stakes ran on Saturday April 2, 2022 and saw the Chris Waller-trained Nature Strip ($2.30F) salute for the punters for his record-equalling third win in the event.

Because of the position of the TJ Smith Stakes towards the end of the autumn carnival, punters have a range of lead-up races to gauge the fitness and form of the runners before placing their TJ Smith bets.

The subsequent two TJ Smith Stakes winners following Lankan Rupee also came off a lead-up run in the Newmarket Handicap with back-to-back champion Chautauqua running 2nd in 2015 and 3rd in 2016. Chautauqua made TJ Smith Stakes history in 2017 when successfully defending his dual titles to become the first three-time winner of the sprint classic.

Chris Waller’s dual defending champion Nature Strip ($2.30F) was too good again winning the TJ Smith Stakes in 2022 by over three lengths, surging clear on the straight to defeat regular rival Eduardo and the three-year-old Paulele with ease ahead of a likely trip overseas to Royal Ascot during the UK’s summer.

Early all-in 2022 TJ Smith Stakes odds provided by Ladbrokes.com.au on the hopeful sprinters heading towards the Group 1 classic sprint will be listed below as soon as available.

Stay tuned for our insider TJ Smith Stakes 2022 betting tips and best bets to be published below the week of the race.

He’s done it twice before and now the Waller star is ready to bounce back third-up and win this race yet again. There have been excuses his past two starts. The Black Caviar was a nightmare, missing the jump and getting sandwiched early before flying home late. The Challenge Stakes was another poor start…but was that a big enough excuse? Back to six furlongs he gets the chance to atone. He is fit, loves Randwick (13:5-3-1) and the Heavy track holds zero fears (3:2-0-1). Barrier 11 of 11 in the conditions is probably spot-on. Bookies are saying he’ll do it, but he’ll need to be at his best. EACH WAY.

Okay, so there’s definitely a few things working against this autumn star who has secured himself something of a cult status his past three runs. That Challenge Stakes second off a Highway race? Wow. He was awesome. Good again in the Maurice McCarten and then carried 52.5kg on a Heavy (9) to win the Group 1 The Galaxy (1100m). He is right up in weights at WFA and needs to beat them at 1200m in one of the country’s best races. It’s a tough ask and his price earlier was more attractive, but love a fairy-tale and this would be it. BACK DON’T SACK.

Forgotten horse in this year’s TJ has to be Overpass. He beat the brilliant mare Forbidden Love – favourite for the Doncaster on Saturday – fresh in the Expressway and has been in good form since including his Inglis Sprint win at Flemington with 59.5kg over this distance. The Galaxy run when fifth to Shelby Sixtysix was brave only 1.34 lengths beaten. Is three-from-three in the Soft, but could be tested on the Heavy (10). Still, ticking plenty of boxes and can surprise a few. PLACE CHANCE.

The TJ Smith Stakes field attracts the autumn’s best sprinters shooting for a share in the lucrative prize money on offer in the Group 1 feature on the opening day of April’s ‘The Championships’ and is released on the Tuesday before Doncaster Mile Day.

The official 2022 TJ Smith Stakes field and barriers are set to be released by Racing NSW on Tuesday March 29, 2022 and will be published in full below.

Chris Waller’s dual defending champion Nature Strip is out to emulate Chautauqua winning a third straight edition of the TJ Smith Stakes this weekend from barrier 11 of 11 in the $2.5 million sprint.

Click here to read more on the key runners in the 2022 TJ Smith Stakes field and betting markets.

The TJ Smith Stakes nominations are taken two months out from the race in early February and attract around 100 hopefuls heading towards the autumn classic run over 1200m at Randwick Racecourse.

The TJ Smith Stakes 2022 nominations close at midday on Tuesday the 8th of February, 2022.

After nominations are taken the list of potential runners is narrowed down with TJ Smith Stakes first acceptances taken in the first week of March, around four weeks before race day.

The TJ Smith Stakes is one of the youngest Sydney races, first run in 1997. Mahogany won the inaugural race, which was then called the Endeavour Stakes and only held listed status. The following year in 1998, the race was renamed in honour of the renowned trainer Tommy Smith and also received Group 3 status. The event worked its way up quickly, elevated to Group 2 status in 2003 and only two years later in 2005 gained Group 1 status.

A new TJ Smith Stakes record was set in 2018 by the three-year-old winner Trapeze Artist who flew home in 1 minute 8.29 seconds, surpassing the previous best time in the event from Black Caviar in 2011.

See below for the full TJ Smith Stakes results dating back to 2000.