The Surround Stakes is now a Group 1 race for three-year-old fillies held at Royal Randwick on Chipping Norton Stakes Day during the Sydney Autumn Racing Carnival. 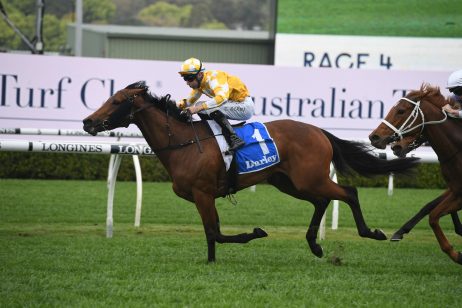 The Surround Stakes is one of the newest Group 1 races in Australia, the event elevated from its former Group 2 status for the first time in 2018. The Surround Stakes is held towards the start of the prestigious Sydney Autumn Racing Carnival on Chipping Norton Stakes Day at Royal Randwick in late February or early March. The meeting is also headlined by the Group 1 Chipping Norton Stakes (1600m) and features a host of other support races including the Group 2 Sweet Embrace Stakes and Group 2 Skyline Stakes over the 1200m.

Run over 1400m, the Surround Stakes is a set weights race offering $500,000 in total prize money for three-year-old fillies. Fillies that previously contested the Group 2 Light Fingers Stakes (1200m) at Randwick earlier in the autumn may be looking for a step up in distance here on their way to some of the other lucrative carnival features, including taking on the boys in the Group 1 Randwick Guineas (1600m) the following week. The 2019 Surround Stakes winner Nakeeta Jane went on to run third behind The Autumn Sun in the Randwick Guineas that year.

Other possible runs for Surround Stakes fillies later in the season include the Group 1 Coolmore Classic (1500m) against the older mares and the Group 1 Vinery Stud Stakes (2000m) at Rosehill at the end of March.

The Surround Stakes 2021 took place on Saturday February 27, 2021 and was won in an upset Forbidden Love.

The latest Surround Stakes 2021 odds and betting prices on the season’s top three-year-old fillies will be available below as soon as markets are out at Ladbrokes.com.au.

Click here to read more on the key hopes in the 2021 Surround Stakes field & betting markets.

Nominations on the Surround Stakes in 2021 are taken the Monday of race week and will be updated in full below once announced.

See below for the full Surround Stakes results dating back to 2000.