The Queensland Oaks field of 3YO fillies lines-up in late May or early June during the Brisbane Winter Racing Carnival. 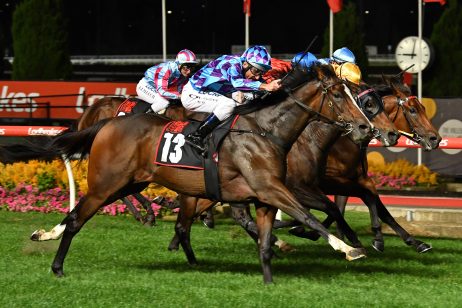 The Queensland Oaks is a set weights race now held at Doomben Racecourse for three-year-old fillies in early June each year. Raced during the Brisbane Winter Racing Carnival over a distance of 2200m, the Group 1 classic is worth $500,000 in prize money and is now the marquee race on Queensland Oaks Day.

Since 2017 the Queensland Oaks Day meeting has run at Doomben Racecourse over 2200m, moving from its previous track (Eagle Farm) and distance (2400m).

The Group 2 Doomben Roses (2000m) is held two weeks earlier and is regarded as the best lead-up race to the Queensland Oaks. The latest fillies to win the Doomben Roses / Queensland Oaks double are Youngstar (2018), Scarlett Lady (2011) and Melbourne Cup winner Ethereal in 2001. Although the race is greatly admired in Queensland, its field is not as strong as the ATC Oaks in Sydney or the VRC Oaks in Melbourne attracting mainly locally-trained hopefuls.

The official Queensland Oaks 2019 Results saw the Garry Newham-trained Winning Ways ($21) travel sweetly thanks to a gun ride by the up-and-coming Matthew McGillivray, who celebrated his first Group 1 success aboard the possible 2019 Caulfield Cup-bound filly.

The winter’s best Queensland Oaks 2019 odds and betting market links to the Group 1 race in Brisbane will be provided below as soon as available through leading online bookmaker Ladbrokes.com.au.

A detailed 2019 Queensland Oaks Form Guide & Betting Preview will be available through Ladbrokes.com.au the week of the race listing all the key race stats and facts to back the winning filly.

The Queensland Oaks field attracts a strong line-up of primarily locally-trained three-year-old staying fillies. The Doomben Roses is the key lead-up race, while in recent years a number of interstate have dominated the race including Kiwi raider Provocative (2016) and superstar Winx (2015).

The official Queensland Oaks 2019 Field & Barriers and will be available in full below once released by Racing Queensland on the Wednesday of race week.

A capacity 2019 Queensland Oaks final field has been announced with 16 three-year-old fillies plus five emergencies accepted for the half-a-million-dollar clash. Race favourite Princess Jenni, chasing a fourth win on the trot after the Group 1 Schweppes Oaks win in Adelaide a month ago, has drawn barrier nine.

Update: First emergency in the Queensland Oaks field – #17e On The White Turf (16) has gained a start as a $19 shot in the Group 1 following the scratching of #7 Belle Roc (4) who sustained a possible career-ending injury on Friday morning in trackwork.

Following the nominations in early May the Queensland Oaks first acceptances close later in the month narrowing down the list of potential three-year-old staying fillies targeting the Group 1 race.

The Queensland Oaks 2019 nominations close on a Tuesday in early May along with all the other winter Group 1 race nominations in Brisbane over the carnival.

First won by Maltmaid in 1951, the Queensland Oaks was a principal race until 1980 when it was automatically elevated to Group 1 status, the year Lowan Star won.

Since 1988 the fastest winning race time for the Queensland Oaks was recorded by Arctic Scent in 1996 with 2 minutes 27 seconds. The slowest winning time was 2 minutes 45.4 seconds by Triumphal Queen in 1989.