The William Reid Stakes is the last of the Melbourne Autumn Racing Carnival Group 1 races taking place on a Friday night at Moonee Valley Racecourse in March. 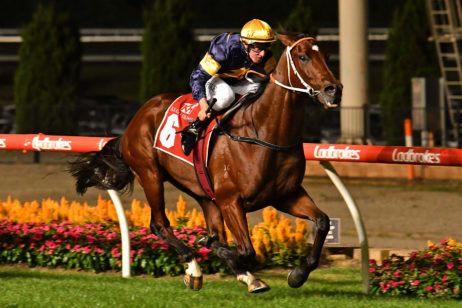 The William Reid Stakes is one of the quality Group 1 races held at the esteemed Moonee Valley Racecourse in Melbourne. Taking place under the lights at the Valley in March each year, this 1200m sprint is conducted under weight-for-age conditions and offers prize money of $500,000.

Today the race is held as the feature race of the William Reid Stakes Night along with the Group 2 Sunline Stakes (1600m) as the final Group 1 meeting of the Melbourne Autumn Racing Carnival.

There are a number of excellent lead-up races held earlier in the Melbourne Autumn Carnival that serve as a good guide for you William Reid Stakes wagers. The Group 1 Black Caviar Lightning (1000m) at Flemington is one such trial race punters should keep an eye on. That earlier race’s namesake, Black Caviar (2013), was the last sprinter to complete the Lightning – William Reid Stakes double.

The 2021 William Reid Stakes takes place under the lights at The Valley on Friday March 19, 2021.

A masterful ride by the ‘Wizard of the West’ William Pike and an explosive turn of foot from the Hawkes Racing-trained four-year-old Masked Crusader ($7) combined for an exciting William Reid Stakes 2021 result. Pike is now equal with Luke Currie on four Group 1 Victorian wins for the season, while Masked Crusader took his 1200m record to four-from-four with his 2.5 length win over the Oakleigh Plate co-champ Portland Sky.

The latest William Reid Stakes 2021 betting odds for the last of the Melbourne Autumn Group 1 races will be available below as soon as open at Ladbrokes.com.au.

Sunline ($1.70 in 2019) was the last favourite in William Reid Stakes betting to salute for the punters.

Each autumn the William Reid Stakes field attracts a smart line-up of proven Group 1 sprinters out of earlier lead-up races including the Oakleigh Plate and Newmarket Handicap. Horses out of the field may continue onto Sydney’s Group 1 TJ Smith Stakes (1200m) the following weekend at Royal Randwick. Black Caviar (2013) was the last winner of the William Reid Stakes – TJ Smith Stakes double.

The 2021 William Reid Stakes field will be announced below the Wednesday before the race and published in full below.

Click here to read more on the key chances in the William Reid Stakes 2021 field and betting markets.

The official 2021 William Reid Stakes nominations close the Monday before the race and will be available right here once announced.

The race is named after the renowned racehorse owner and banker William Reid. The race reached the peak of its prestige in 2005, and for two years was held as the second leg of the Global Sprint Challenge. It has now been replaced by The Age Classic.