The Randwick Guineas is a Group 1 event held at Randwick Racecourse in early March as one of the early features of the Sydney Autumn Racing Carnival. 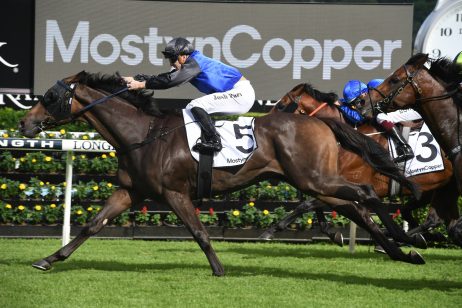 The Randwick Guineas is held at New South Wales’ premier track, Royal Randwick Racecourse, during the Sydney Autumn Racing Carnival in early to mid-March each year.

Run over 1600m and offering $1 million in prize money, the Randwick Guineas is open to all 3 year old horses. As a set weight race, colts and geldings carry 56.5kg and fillies must carry 54.5kg.

Spring Champion Stakes winner Shadow Hero made it two Group 1 wins from two starts at Royal Randwick improving on an unplaced lead-up run fresh in the Hobartville Stakes to charge home in the Randwick Guineas 2020 results ahead of the Rosehill Guineas and Australian Derby over further this autumn.

The latest Randwick Guineas 2020 odds will be available below as soon as betting opens at Ladbrokes.com.au.

The Randwick Guineas field attracts a line-up of the season’s best middle-distance three-year-olds and is released by Racing NSW on the Wednesday before the race.

The 2020 Randwick Guineas field and barriers will be announced on Wednesday March 4, 2020 and published in full below.

The Randwick Guineas 2020 final field features 14 three-year-olds including the rails-drawn favourite Super Seth racing third-up on the back of a Manfred Stakes win and second when taking on the older horses in the Futurity Stakes on Blue Diamond Day.

The 2020 Randwick Guineas nominations attract in excess of 60 three-year-old hopefuls and will be published in full below.

The Randwick Guineas has been run and won since the event inaugurated in 1935 as the Canterbury Guineas. It changed to the Randwick Guineas from 2006 onwards and offers the winner a ballot free ride into the Doncaster Mile and Australian Derby

The Randwick Guineas is the opening leg of the Sydney Three Year Old Triple Crown series of races held during the autumn. The second leg is the Rosehill Guineas followed by the Australian Derby held during The Championships over the mile and a half in April.

The race has undergone a number of distance changes over the years and has been run over the current 1600m mile format from 2006. It began as a Principle status race until 1980 when it gained its current Group 1 title.

There’s also been a number of different venue changes for the Randwick Guineas including previous editions run at Canterbury Park, Rosehill Gardens and Warwick Farm.

See below for the Randwick Guineas results going back to 2000m.