The Golden Slipper is the richest race for two-year-old horses in the world. The $3.5 million Group 1 runs at Rosehill Gardens in March during the Sydney Autumn Racing Carnival. 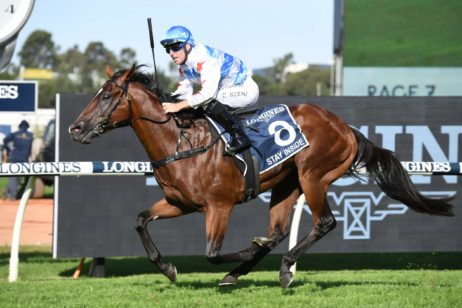 The Golden Slipper Stakes is one of the premier races of the Sydney Autumn Racing Carnival and is also the richest two year old race in the world. Held in late March at Rosehill Gardens, the 1200m sprint event is worth a lucrative $3.5 million in prize money and is the feature event on Golden Slipper Day.

A total of five elite level autumn races take place at the meeting with the Golden Slipper joined by the: Group 1 George Ryder Stakes (1500m), Group 1 Ranvet Stakes (2000m), the Group 1 The Galaxy (1100m) and the Group 1 Rosehill Guineas (2000m) for three-year-olds.

Their positioning two weeks before the Golden Slipper Stakes makes the Todman Stakes and Reisling Stakes the best guides to the Group 1 in recent years.

Note: The 2021 Golden Slipper Stakes was postponed until Saturday March 27th, 2021 due to heavy rainfall and unsafe track conditions at Rosehill Gardens.

The 2021 Golden Slipper ran on Saturday Saturday March 27, 2021 and was won by the Richard & Michael Freedman-trained Stay Inside.

The Richard & Michael Freedman-trained Stay Inside ($4.60) was ridden to perfection by now three-time champion hoop Tommy Berry winning the Golden Slipper 2021 by nearly two lengths ahead of the Godolphin-raced Anamoe ($15), with the fellow James Cummings-trained Ingratiating ($20) a further two lengths back third.

Check out our comprehensive Golden Slipper Stakes Form Guide page for the latest facts and stats on the race.

Favourites have a fair recent record in the Golden Slipper results of the past decade with five saluting for the punters: Sebring (2008), Sepoy (2011), Overreach (2013), Vancouver (2015) and Farnan (2020) who handed Gai Waterhouse with her record seventh win in the classic.

The Golden Slipper 2021 odds provided by Ladbrokes.com.au will be available as soon as announced.

The official 2021 Golden Slipper Stakes field of final acceptances is due to be released by Racing NSW at 9am (local) on Tuesday March 16, 2021 and will be published below.

The Golden Slipper Stakes 2021 final field is now out featuring 16 smart two-year-olds including last Saturday’s Pago Pago Stakes winner Shaquero drawn out in barrier 15 for Chris Waller. There were two late entries into the race led by returning Blue Diamond champion Artorius also out wide in 13 chasing the double last completed by Sepoy back in 2011.

Click here to read more on the key runners in the 2021 Golden Slipper field & betting markets.

Note: The original 2021 Golden Slipper Stakes field and barriers will carry on from the postponed meeting to the race’s new date of March 27th, 2021.

Stay up to date with the latest on the Golden Slipper Field at our dedicated page.

Following the nominations the Golden Slipper first acceptances close in early October of the year before at a cost of $550 to connections.

Second acceptances for the 2021 Golden Slipper Stakes were taken by the Australian Turf Club (ATC) on Monday the 25th of January, 2021 attracting 383 two-year-olds.

Golden Slipper second acceptances further narrow down the list of hopefuls heading towards the autumn classic and are the first round of declarations taking place the year of the race, usually in late January or early February.

Late Golden Slipper Stakes entries are open until 11am (local time) on the Monday prior to the race but attracts a hefty $150,000 for owners.

The Golden Slipper began as a Principle race from 1957 – 1978 before gaining its current Group 1 status in 1979. It was held over six furlongs until 1972 and then officially 1200m with the metric conversion coming in from 1973 onwards.

From 2009 – 2014 the Golden Slipper Stakes ran on the first Saturday of April. Prior to 2008 it ran on the Saturday before Good Friday. It now runs in March leading up to the two-day ‘The Championships’ on the first two Saturdays of April.

In both 2017 and 2018 the Golden Slipper trifecta was an all-filly affair.

In 2020 co-trainer Gai Waterhouse celebrated her record seventh success and first in partnership with Adrian Bott when the favourite Farnan saluted in front of a spectator free grandstand due to the COVID-19 pandemic.

In 2021 the original Golden Slipper Stakes race day was abandoned due to heavy rainfall and unsafe track conditions and postponed to the following Saturday.

See below for the full Golden Slipper winners and results dating back to 2000.