The Tattersall's Tiara is the final Group 1 race of the Brisbane Winter Racing Carnival taking place at Doomben Racecourse in late June each year. 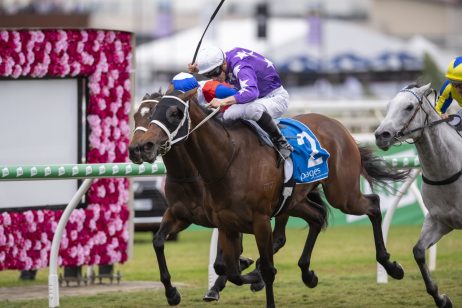 The Tattersall’s Tiara, previously known as the Winter Stakes, wraps up the tailend of the Brisbane Winter Racing Carnival. It is the last Group 1 race for the season in Queensland and usually occurs the weekend following the Ipswich Cup. Open only to fillies and mares and run under weight for age conditions, the Tattersall’s Tiara field attracts talented female horses from all around Queensland. Interstate horses often make the journey, ensuring top level competition over the 1400 metre length of the race.

The 2019 Tattersall’s Tiara ran on Saturday June 22, 2019 and was won by the Chris Waller-trained mare Invincibella.

The winter’s top Tattersall’s Tiara 2019 odds and betting market links to Ladbrokes.com.au are available below.

Invincibella in 2019 is the last mare to do the Dane Ripper Stakes – Tatt’s Tiara double.

The official Tattersall’s Tiara 2019 field & barriers will be released as of the Wednesday before the race and published in full below once announced.

Read more on the Tatt’s Tiara Field 2019 where the favourites have drawn wide.

The 2019 Tattersall’s Tiara nominations close on Monday June 16, 2019 and will be available below once released by Racing Queensland.

The inaugural edition of the Tattersall’s Tiara was in 1989, when it was known as the Winter Stakes. La Posette took out the first edition of a race that was to become famous in its own right. While it is a weight for age race, only one horse has ever seen victory twice; Bonanova won consecutive victories in 1999 and 2000.

The race distance has also changed over time as well. From its inception until 2006 the Tattersall’s Tiara was run over 1500m. With the upgrade to Group 1 came a change in distance, and since 2007 the race has been run over 1400m.