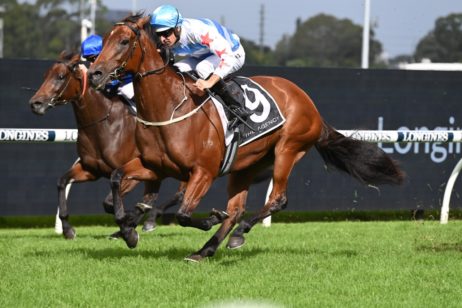 There are five Group 1 races on the Golden Slipper Stakes Day card with the George Ryder Stakes accompanied by the:

Key lead-up races to the George Ryder Stakes held earlier in the autumn include the Group 2 Apollo Stakes (1400m) and the Group Chipping Norton Stakes (1600m) in February.

The updated George Ryder Stakes 2022 odds will be available the week of the race below with pricing from Ladbrokes.com.au.

Forbidden Love ($2.40 in 2022) was the last favourite in George Ryder Stakes betting to win.

The 2022 George Ryder Stakes field is released on the Wednesday of race week and will be published in full below.

The George Ryder Stakes 2022 final field features a quality line-up of middle-distance stars including the Annabel Neasham-trained Mo’unga back in Sydney second-up off a Futurity Stakes second and the rails-draw Private Eye for Joe Pride.

Click here to read more on the key chances in the 2022 George Ryder Stakes field and betting markets.

Randwick Guineas winner Converge has been withdrawn in favour of a rematch with Anamoe in the Rosehill Guineas one race earlier.

Chris Waller opted not to run his mare Hungry Heart due to the Heavy (8) track.

“Mo’unga has unfortunately returned a slightly abnormal blood profile. This was undertaken today after leaving feed & a slight increase in his usual temperature. We have taken the unfortunate decision to scratch from tomorrows G1 George Ryder in the best interests of Mo’unga,” @ANeashamRacing confirmed on Twitter.

The updated 2022 George Ryder Stakes nominations close on the Monday before Golden Slipper Day and will be published below as soon as released by Racing NSW on March 14, 2022.

Equine superstar Manikato holds the record for the fastest winning time in George Ryder Stakes, winning the 1980 edition in a time of  1 minute and 21.6 seconds.

In 2021 the original Golden Slipper Stakes race day including the George Ryder Stakes was abandoned due to heavy rainfall and unsafe track conditions and postponed to the following Saturday.

In the past decade Chris Waller has dominated the George Ryder Stakes results winning with: Danleigh (2010), Rangirangdoo (2011), Metal Bender (2012) and Winx (2016-19). Winx is the standout George Ryder Stakes winner, the first to win the race three times on the trot with her three-peat achieved in 2018, which she then added to with a fourth in 2019 before her retirement later that year.

In 2020, Dreamforce became the first George Ryder Stakes winner in the post-Winx era improving on his third to the equine superstar the year prior. Dreamforce also returned in 2021 and was a brave runner-up to shock winner Think It Over.

See below for the full George Ryder Stakes results going back to 2000.