The Chelsmford Stakes is a Group 2 mile race run at Royal Randwick in September as a lead-up to the season's Group 1 races. 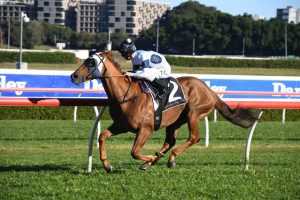 The Group 2 Chelmsford Stakes is a 1600m mile race held at Sydney’s Randwick Racecourse during the Sydney Spring Racing Carnival. It is the first mile weight-for-age race held during the carnival and attracts a star-studded field of Group 1 gallopers each season.

Worth a lucrative $250,000 in prize money, the Chelmsford Stakes makes a solid lead-up for horses heading towards races like the Group 1 Epsom Handicap (1600m) and Group 1 The Metropolitan (2400m) at Royal Randwick in early October.

The ideal lead-up race to the event is the Group 1 Winx Stakes (1400m) and many horses will go on to race in the Group 1 George Main Stakes (1600m) held three weeks later. Samadoubt (2019) was the last horse to do the Winx Stakes – Chelmsford Stakes double.

The Chelmsford Stakes has been won by many star horses over the years including four-time Cox Plate hero Winx (2017).

The latest edition of the Chelmsford Stakes ran on Saturday September 7, 2019 and was won in runaway fashion by Winx Stakes champion Samadoubt.

The punters again forgot about Bjorn Baker’s class galloper Samadoubt who dominated the official Chelmsford Stakes 2019 Results with a 3.3 length victory over $2 favourite Avilius in an upset on the back of taking out the Group 1 Winx Stakes as a roughie hope.

Read more on the impressive Chelmsford Stakes 2019 win by Samadoubt.

The spring’s top Chelsmford Stakes 2019 betting odds will be available right here courtesy of Ladbrokes.com.au the week of the race.

The official 2019 Chelmsford Stakes field and barrier draw is released by Racing NSW the Wednesday of race week, the full line-up of Group 1 bound gallopers to be published below.

The Chelmsford Stakes 2019 Final Field attracted a star-studded line-up of 16 gallopers including eight for trainer Chris Waller who chases his third straight win in the race. Among Waller’s hopefuls are the defending Chelmsford Stakes winner Unforgotten (6) who faces a tough task against the likes of Cox Plate-bound Avilius from the Godolphin stables and Bjorn Baker’s upset Winx Stakes champion Samadoubt in the outside alley.

Update: The 2019 Chelmsford Stakes Field is down to 15 hopefuls with Avilius now odds-on in betting after the scratching of #5 Sixties Groove (9) who contested Friday’s Wyong Gold Cup (finishing 15th of 16) instead.

First held in 1895 and won by Newman, the Chelmsford Stakes has been won by several big names including the legendary Phar Lap in 1930 and by Tulloch in 1960.