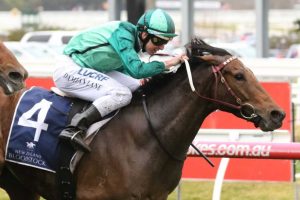 The John F. Feehan Stakes 2020 ran on Saturday September 5, 2020 and saw an incredible return to form from dual Cox Plate placegetter Humidor in his debut for Chris Waller.

Dual Cox Plate placegetter Humidor ($18) returned to his best in an incredible return to form from the veteran eight-year-old who dominated the 2020 Ladbrokes Feehan Stakes results with a narrow win over the Melbourne Cup favourite Surprise Baby ($3.30) in his debut for the Chris Waller stable.

The season’s best John F. Feehan Stakes 2020 odds and betting market links on the Cox Plate qualifier will be available for punters below the week of the race.

The official John F. Feehan Stakes 2020 Field & Barriers are announced by Racing Victoria on the Wednesday leading-up to the event, the full list of potential Cox Plate horses to be published below.

The 2020 Ladbrokes Feehan Stakes final field features just the nine hopefuls chasing a ballot free ride into the Cox Plate with betting led by the early Melbourne Cup favourite Surprise Baby (7). Surprise Baby races for the first time since a fifth in the ‘race that stops a nation’ last year and will be ridden by the 2019 Melbourne Cup winning rider on Vow And Declare, Craig Williams.

Click here to read more on the key horses in the 2020 Feehan Stakes field and betting markets.

Update: #2 Regal Power (9) has been scratched from the field with the spring now over for the Bob Peters-raced All-Star Mile winner who was found to be suffering from a lung infection.

Nominations for the John F. Feehan Stakes in 2020 close the Monday of race week and will be published in full below once announced.