The Reisling Stakes is a Group 2 race for 3YO Fillies heading towards the Golden Slipper Stakes and runs on Randwick Guineas Day. 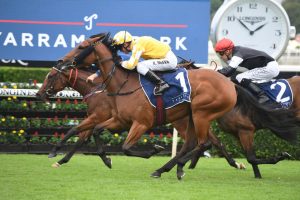 The Reisling Stakes – also known as the Reisling Slipper Trial, is a 1200m sprint race held at Sydney’s Randwick Racecourse on Randwick Guineas Day during the autumn.

Contested by two year old fillies only, the set weights race requires the young racing hopefuls to carry 55.5kg. Worth $300,000 in prize money, the Group 2 race is a great lead up race to the Group 1 Golden Slipper Stakes (1200m) with the winner of the Reisling Stakes winner exempt from ballot for the $3.5 million event.

The Magic Night Stakes (1200m) held a week later at Rosehill is another option for the Reisling Stakes graduates on way to the Golden Slipper.

The Reisling Stakes 2020 for fillies ran on Saturday March 7, 2020 and was won by the Peter & Paul Snowden-trained favourite Dame Giselle.

Peter & Paul Snowden’s Golden Gift winner Dame Giselle raced her way into Golden Slipper contention with a narrow but gutsy fight-back win in the 2020 Reisling Stakes over See You Soon and Mildred.

The updated Reisling Stakes 2020 betting odds on the Golden Slipper Stakes 2020 bound fillies will be available below with markets courtesy of Ladbrokes.com.au as soon as released.

The official 2020 Reisling Stakes field and barriers are announced on the Wednesday of race week and the full list of Golden Slipper-bound fillies running in the lead-up will be available below once released.

It is an open field of 11 two-year-old fillies in the 2020 Reisling Stakes with Team Snowden’s Golden Gift winner Dame Giselle racing second-up the narrow favourite ahead of Cellsabeel who is out to atone for her fifth in the Silver Slipper Stakes.

Update: One-time Golden Slipper favourite Cellsabeel (1) has been scratched from the field having been found unfit to race due to lameness in her off fore heel. She holds an acceptance for Sunday’s Group 3 Black Opal Stakes but needs to pass a vet check to run.

The Reisling Slipper Trial and Reisling Stakes winners going back to 2000 are listed below.