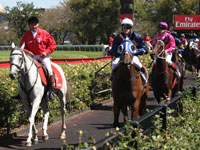 Imagine sitting on a picnic blanket, champagne in hand and surrounded by thousands of people with some of the most beautiful hats and extravagant fascinators. Suddenly the crowd starts cheering and screaming as 15 or so of the greatest horses sprint past you to cross the finish line. Where are you? At one of Australia’s several fantastic racing carnivals held throughout the year of course!

Whether you live in the racing capital of Melbourne or on the other side of the country at Perth, each state hosts some of the biggest calendar events of the year. The Melbourne Spring Racing Carnival is undoubtedly the biggest racing event on Australian soil. Home to the $8 million Melbourne Cup, the carnival has brought fame to the likes of Phar Lap and Makybe Diva. The four day Flemington Carnival is the major section of the Spring Carnival and features the Caulfield Cup, Melbourne Cup, VRC Oaks and Mackinnon Stakes.

Following closely in stature is the Sydney Spring Racing Carnival which features the Group 1 Epsom Handicap, The Metropolitan and the Spring Champion Stakes. Held predominantly at Rosehill Gardens and Royal Randwick, the Sydney carnival prepares many of Melbourne’s hopeful contenders through the George Main Stakes and the $1 million Golden Rose event for three year olds.

The action of the Sydney Spring Racing Carnival now rivals that in Melbourne during the same time of year since the introduction of the world’s richest turf race – the $14 million The Everest – plus a host of other new seven-figure features including the $7.5 million Golden Eagle for four-year-olds.

The Brisbane Winter Racing Carnival is one of the few carnivals to host races during the cooler months of May and June. Featuring the highly anticipated Stradbroke Handicap, the carnival is known for bringing about racing legend Rough Habit which won the Stradbroke Handicap twice in 1991-92. The Queensland event is held at two major locations, Eagle Farm Racecourse and Doomben Racecourse.

The Perth Summer Racing Carnival follows straight after the Melbourne Spring Racing Carnival and is ideal for horses which are eager to continue their success from Victoria. Home to the Railway Stakes, Winterbottom Stakes and Kingston Town Classic all worth $1 million in stakes, the carnival kicks off in late November and concludes around New Year’s with the Perth Cup.

Held at Morphettville racecourse, the Adelaide Racing Carnival features the plenty of Group One races including the Robert Sangster Stakes, Australasian Oaks and South Australian Derby.

Melbourne also hosts an Autumn Racing Carnival, which features the Newmarket Handicap and the Blue Diamond Stakes. All three major racecourses; Flemington, Caulfield and Moonee Valley are used during the event which commences on New Year’s Day and concludes in April with the Easter Cup Day.

The Sydney Autumn Racing Carnival is equally as big as the Melbourne version and features the prestigious Golden Slipper Stakes. With over 12 major race days, Sydney race-goers will definitely be able to find a day which suits them!