The Epsom Handicap is a $1 million Group 1 race run at Royal Randwick over the mile during the Sydney Spring Racing Carnival. 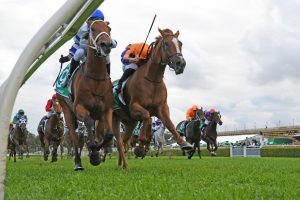 The Group 1 Epsom Handicap is the premier handicap event of the Sydney Spring Racing Carnival held in last September or early October annually. Run at Royal Randwick Racecourse, the 1600m open handicap race is one of the two biggest mile races at the course. The other is the Doncaster Handicap held in April during ‘The Championships’.

This season the Epsom Handicap 2019 took place on Saturday October 5, 2019 and was won by the Chris Waller-trained four-year-old Kolding.

The official Epsom Handicap 2019 Results and Finishing Order will be detailed below when the million-dollar Sydney event runs on Saturday October 5, 2019 .

The updated Epsom Handicap 2019 betting markets will be provided for punters below across the Sydney Spring Racing Carnival as lead-up races are run and won. Proven milers at the Randwick track dominate the Epsom Handicap odds each year, as do the in-form Chris Waller-trained hopefuls.

Check out the latest 2019 Epsom Handicap odds below complete with market links to Ladbrokes.com.au.

Each year the Epsom Handicap field is announced on the Tuesday of race week and features the season’s top-class milers coming off lead-up runs in races including the Group 2 Shannon Stakes (1500m) held at Rosehill the week before and the Group 1 George Main Stakes (1600m).

Horses out of the Epsom Handicap field often go onto run in other Group 1 races heading south for the Melbourne Spring Racing Carnival. The 2018 Epsom winner Hartnell ran second next-up in Caulfield’s Group 1 Toorak Handicap (1600m). He finished top three in a further three Group 1 races the following autumn and was second in the inaugural $5 million All-Star Mile at Flemington behind Mystic Journey.

The official Epsom Handicap 2019 Final Field & Barriers will be published in full below once announced by Racing NSW.

The 2019 Epsom Handicap Field is now out featuring a capacity line-up of 20 gallopers led in betting by the John Thompson-trained Dreamforce drawn the far outside alley.

Update: Class mare El Dorado Dreaming (1) has been scratched from the 2019 Epsom field with all remaining runners coming in one barrier.

The 2019 Epsom Handicap nominations close the Monday of the race and the full list of early entries will be detailed below.

The official Epsom Handicap 2019 nominations are now out with 83 early entries for the feature mile clash including gun Kiwi raider Te Akau Shark and his last start conqueror in the Group 2 Tramway Stakes, Dreamforce.

The Epsom Handicap was first won by Dundee in 1863 and has quite a few dual winners including Toi Port in 1963-64, Super Impose in 1990-91 and Desert War in 2004-05. Due to the Equine Flu, the race was not held in 2007. If you think the history on this race can help you in getting an edge in the market you can join any of the featured bookmakers on our partner site Freebets.com.au

In 2015 Winx won the Epsom Handicap, the third straight champion for trainer Chris Waller, and went on to make history taking out Melbourne’s Group 1 Cox Plate (2040m) at weight-for-age next start. Winx made Cox Plate history with a record four wins in the classic from 2015-18.

Recent winners of the Group 1 Epsom Handicap are detailed below along with the placegetters and winning times.