The 2022 Adelaide Autumn Racing Carnival runs from March - May taking place after the Sydney features each season and is headlined by Group 1 races including the Robert Sangster Stakes, SA Derby and The Goodwood. 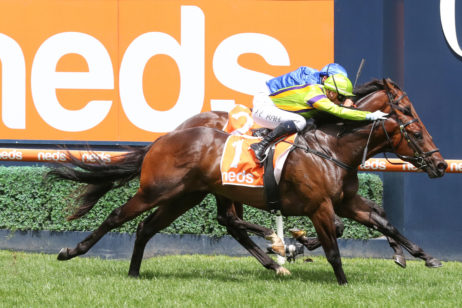 Adelaide in South Australia is home to an exciting and elite range of Group races that are held as part of the 2022 Adelaide Autumn Racing Carnival.

Before the carnival gets into full swing, the Group 3 Lord Reims Stakes (2600m) runs in early March as a lead-up to the iconic Adelaide Cup, which is contested over the same two mile distance as the world famous Melbourne Cup in the spring.

From mid-March things heat up with Adelaide Cup Day and the opening Group 1 race contested at Morphettville each season takes place on either the last Saturday in April or first of May with the running of the Australasian Oaks.

Other highlights during the Adelaide Autumn Racing Carnival including the South Australian Derby for the three-year-old stayers and The Goodwood sprint worth half-a-million in prize money and attracts stars from right around the country.

Visit Ladbrokes for the best Adelaide Group 1 racing odds and offers this autumn!

There are a host of major Morphettville race days held during the annual Adelaide Racing Carnival:

Auraria Stakes Day runs in early April and is headlined by the Group 3 $127,250 Auraria Stakes (1800m) for the three-year-old Australasian Oaks-bound fillies. Also on the program are the Listed $107,250 Port Adelaide Guineas (1800m) which has produced a number of subsequent SA Derby winners over the years. The two-year-old fillies also have a black-type target on the card in the form of the Listed $107,250 Dequetteville Stakes (1050m).

Towards the end of April Morphettville hosts a double shot of Group 3 racing action including the weight-for-age RN Irwin Stakes (1100m) for horses that traditionally back-up in the Euclase Stakes before shooting for a Group 1 The Goodwood run. The meeting also features the Listed $107,250 Redelva Stakes (1100m) for the three-year-old sprinters.

As of 2022, the opening Group 1 of the Adelaide Autumn Racing Carnival is now the Group 1 Australasian Oaks, which is a 2000m race for three-year-old fillies at set weights worth $500,000 in stakes. Previously run on Robert Sangster Stakes Day, the Australasian or South Australian Oaks is now the feature race on its own meeting. Another South Australian Derby lead-up takes place on the same day in the form of the Group 3 SAJC Chairman’s Stakes (2000m), while the Group 3 Breeders’ Stakes (1200m) for the two-year-old is the other key support act on the card.

The second Group 1 Morphettville race meeting of the autumn, this day is held on a Saturday in early May and the feature race on the card is the Group 1 Robert Sangster Stakes (1200m), which is a weight-for-age event for fillies and mares currently offering just over $500,000 in prize money and won by the likes of Black Caviar (2012) and Allinghi (2005).

The Adelaide Group 1 events continue in the form of the South Australian Derby (2500m) in mid-May, which offers a total of $500,000 in prize money and that attracts stayers from local and interstate stables. Runners may come off a Morphettville lead-up in a race like the Chairman’s Stakes or Australasian Oaks. The other Group status race on SA Derby Day sees the two-year-olds face off in the Group 3 SA Sires’ Produce Stakes (1400m) on the Morphettville Parks track, while the  Listed Adelaide Guineas (1600m) for three-year-olds is also popular with the punters.

With half-a-million million in prize money up for grabs, Adelaide’s premier sprint race is the Group 1 The Goodwood (1200m) run in late May. The race is now a set weights plus penalties event and continues to draw ace sprinters from interstate stables with standout winners including Black Caviar (2012) and Black Heart Bart (2016).

The Goodwood Day also hosts four Group 3 events making for a top day of racing and betting. The Group 3 RA Lee Stakes (1600m) is a great race for milers, the two-year-olds face off in the Group 3 National Stakes (1200m), the Group 3 SA Fillies Classic (2500m) is a top event for the Australasian Oaks graduates and the Group 3 Proud Miss Stakes (1200m) is open to fillies & mares only.