Peter & Paul Snowden went back-to-back in the $2M Magic Millions 3YO Guineas (1400m) with the progressive King Of Sparta saluting in the same colours as Aim from last year on the big stage at the Gold Coast. 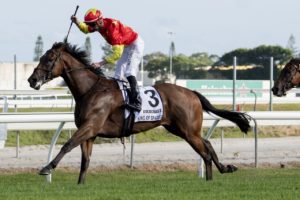 King Of Sparta was good saluting for the punters as the well-backed late favourite in the $2M Magic Millions 3YO Guineas on the Gold Coast. Photo: Steve Hart.

Improving on a lead-up third in the Listed Gosford Guineas (1200m) a fortnight back, the up-and-coming son of I Am Invincible finally put it all together at the right time to secure an impressive victory in the Magic Millions 3YO Guineas 2022.

The in-form Nash Rawiller had his first sit on the horse and gave him the perfect ride, getting the well-backed galloper to switch off and save his power before producing an outstanding late turn of foot to take out the $1.14 million first prize.

The race panned out perfectly with a fast pace working in the gelding’s favour, Rawiller peeling out at the top of the straight before King Of Sparta unleashed with a big run to reach the lead at the 150m and hit the line well.

“He’s a horse that’s always had an immense amount of talent but always seems to do so much wrong. He’s been his own worst enemy really.

“Thankfully there was always going to be good tempo and he got into a lovely trailing position midfield where we always wanted to be.

Runner-up Me Me Lagarde earned plenty of admirers with her ultra-impressive run from a wide gate to finish a brave second.

The Toby & Trent Edmonds-trained Star Turn filly, winner of the Listed Gold Edition Plate (1200m) at Eagle Farm last time out, in the end was narrowly denied the huge pay day having done all the work from the outside alley to cross early.

In third rounding out this summer’s Magic Millions 3YO Guineas trifecta was nicely-bred Capitalist filly Socialist for the meeting’s Magic Millions 2YO Classic winning trainers Ciaron Maher & David Eustace who took out the other $2 million feature with odds-on favourite Coolangatta.

Snowden said the team were hoping for a big Sydney Autumn Racing Carnival from the maturing King Of Sparta who showed signs of being a very good horse last preparation running third in the Group 2 Roman Consul Stakes (1200m).

“Maturity is what he’s always lacked,” he said.

“Hopefully he is that better class of horse now and he can keep going this way.”