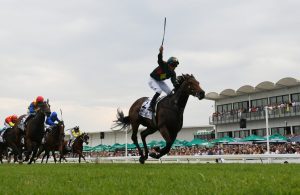 Offering a lucrative $2 million in prize money plus trophies worth $5,000 the Magic Millions 3YO Guineas holds Restricted Listed status and is contested at set weights plus penalties over 1400m.

Alternatively the three-year-olds in the race could be first-up after their spring campaigns that could have seen them run in races like the Group 2 Sandown Guineas (1600m) in November. The Wyong Magic Millions 3YO & 4YO Stakes (1200m) in December is another traditional lead-up to the lucrative race in Queensland the following month.

After the Magic Millions Guineas at the Gold Coast many horses go on to contest autumn races including the Group 1 Australian Guineas (1600m) at Flemington in Melbourne in early March.

The Magic Millions 3YO Guineas 2020 ran at the Gold Coast on Saturday January 11, 2020 and after plenty of pre-race drama was easily won by the odds-on favourite Alligator Blood.

The Magic Millions 3YO Guineas 2020 results saw star Queenslander Alligator Blood overcome plenty of pre-race drama to easily account for his rivals in a brilliant two length victory as the odds-on favourite. After a four-hour travel delay getting to the Gold Coast for the $2 million feature, Alligator Blood also had to stay calm throughout a pre-race scratching. None of it phased the ultra-consistent gelding however who took his record up to eight wins from nine starts and his career prize money up over $2 million.

The official Magic Millions 3YO Guineas 2020 field of final acceptances is set for release in early January and will be published in full below.

The 2020 Magic Millions 3YO Guineas Field & Barriers are now out with the odds-on favourite Alligator Blood looking to complete the Vo Rogue – Magic Millions Guineas double for the third straight season from barrier 11 (into 8).

Update: The rails-drawn Superium (1) has been scratched from the 2020 Magic Millions Guineas field paving the way for the Bjorn Baker-trained first emergency Let It Pour to gain a start from out wide. With the other emergencies also officially withdrawn, the odds-on favourite Alligator Blood has come into the ideal barrier seven draw.

See below for a full list of Magic Millions 3YO Guineas winners going back to 2001 including winning jockeys, trainers and times.