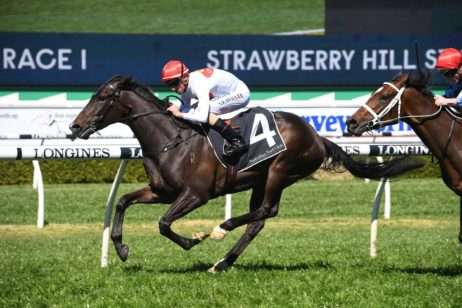 Horses may come into the Magic Millions Gold Coast Cup field via an earlier summer lead-up in Queensland including the Group 3 George Moore Stakes (1200m) and the Listed Lough Neagh Stakes (1350m) at Doomben in December. Sydney’s Group 2 Villiers Stakes (1600m) at Randwick is also a good Magic Millions Cup lead-up and in 2015 Strawberry Boy ran third in the former and runner-up in the latter.

The riches of the Brisbane Winter Racing Carnival often calls graduates of the Magic Millions Cup with races like the Group 2 QTC Cup (1300m) and the Group 1 Stradbroke Handicap (1400m) at Eagle Farm make nice upcoming targets later in the year.

The Gold Coast Magic Millions Cup 2021 ran on Saturday January 16, 2021 and was won by the Wyong Magic Millions 3YO & 4YO Stakes champ Eleven Eleven.

He was officially awarded last year’s Magic Millions Guineas victory with the Alligator Blood disqualification, and 12 months’ on the Gregory Hickman-trained Eleven Eleven enjoyed another victory taking out the 2021 Magic Millions Cup results.

Vega One ($3.30 in 2020) was the last favourite in Magic Millions Cup betting to salute for the punters.

The Magic Millions Cup field features a quality list of Magic Millions qualified gallopers chasing the big money in the January clash and is restricted to 16 runners plus five emergencies.

The official Gold Coast Magic Millions Cup 2021 field and barriers are released on Wednesday January 13, 2021 and will be published in full below.

Mark Currie’s The Buffering winner Soxagon heads the 2021 Magic Millions Cup field and weights with 59kg for this Saturday’s event at the Gold Coast.

Locally-trained Queensland runners have a strong record in the Magic Millions Cup results including wins by the Tony Gollan-trained Spirit Of Boom (2012). Sydney’s best Chris Waller prepared back-to-back Magic Millions Cup winners at the Gold Coast with Triple Elegance (2013) and Velrosso (2014). The event was run over a shorter 1200m distance in 2003.

The Magic Millions Cup prize money was boosted to $1 million for the first time in 2016 and the race day is now Australia’s first $10 million meeting.

See below for a full list of Magic Millions Cup winners and results going back to the race’s first running in 2003.

The Annabel Neasham-trained Zaaki will seek atonement for his last start flop...

The inaugural field of fillies and mares facing off in this Saturday’s $2...

A quality field of 14 stayers chasing a start in the great Melbourne Cup race...

A quick back-up into the $5 million Ladbrokes Cox Plate could be on the cards...

A terrific late run by Art Cadeau set the crowd alight on The Everest Day as...

Gunstock was firing on all cylinders getting a lovely soft run before...