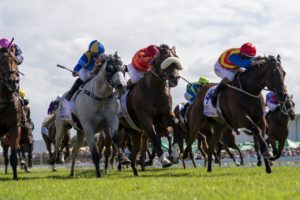 Eleven Eleven made history as the first dual champion when narrowly winning the 2022 Magic Millions Cup at the Gold Coast. Photo: Steve Hart.

As a three-year-old in 2020 the brilliant son of Fastnet Rock took out the Magic Millions 3YO Guineas before returning last Queensland Summer Racing Carnival to claim the $1M Magic Millions Cup race.

His only victory since was in the $300,000 The Warra (1000m) at Kembla Grange last November, but he went to another level on the glitter strip again today to become the first dual Magic Millions Cup champion in history.

It was a close result last year under Nash Rawiller and 12 months on Eleven Eleven celebrated another devastatingly close victory.

This time it was jockey Hugh Bowman who urged him over to get the job done late as four horses hit the line together.

After making up ground from a midfield position throughout, Eleven Eleven finally got the split and burst through inside the final furlong to eventually run down and get the better of the on-speed horses.

Eleven Eleven won on the outside by the bob of the head over the brave Holyfield who had got the perfect run third the fence throughout, getting an inside run to snatch the lead at the 150m before eventually crossing second.

In third rounding out the Magic Millions Cup 2022 trifecta and losing few admirers in doing so having overcome a wide alley was the Desleigh Forster-trained Apache Chase.

“He went super. He got a super ride, he got shuffled back a bit further back then we probably would have liked, but he got out, I couldn’t believe it,” Hickman told the media after the race.

“He has been (a special horse), especially to be able to win here three years in a row, unbelievable.”

As for future plans, Hickman said they would likely be back at next year’s Magic Millions Carnival looking to further add to the fairy tale.