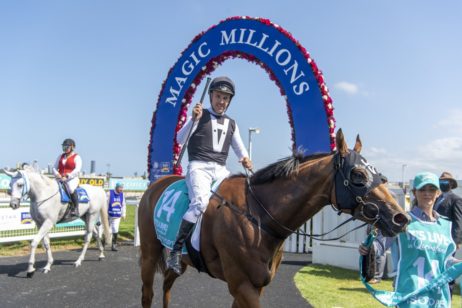 The Magic Millions Gold Coast Sprint race is a nice summer target for horses coming off an earlier run in something like one of the Boxing Day races held at Randwick in Sydney or the Listed Canterbury Classic (1200m) also run in Sydney in late December.

Magic Millions Sprint graduates may head to Sydney and Melbourne during the autumn targeting the bigger sprint races across the carnivals.

The Gold Coast Magic Millions Sprint 2022 ran on Saturday January 15, 2022 as the Magic Millions Snippets and was won in brilliant first-up fashion by the returning favourite Isotope ($2.80F).

The Sydney Autumn Racing Carnival is calling for the Tony Gollan-trained Deep Field mare Isotope ($2.80F) after she resumed off a lengthy spell, bouncing back from colic surgery to post an impressive first-up victory in the Magic Millions Snippets 2022.

Click here to read more on the eye-catching return of Isotope in the $1M Magic Millions Snippers results.

The Gold Coast Magic Millions Sprint field features a class line-up of short-distance Magic Millions graduates, many of which are Group 1 performed. The capacity number of starters in the race is 16 plus five emergencies.

The official Magic Millions Sprint field 2022 is set for release in early January will be published right here along with the barrier draw.

The 2022 Magic Millions Snippets final field features 13 sprinters (following the scratching of #1 Beau Rossa) including the Tony Gollan-trained Baller coming off back-to-back seconds and his last-start conqueror in the Listed Falvelon at Doomben Roheryn from the Godolphin stable.

Click here to read more on the key runners in the Magic Millions 2022 Snippets field and betting markets.

Notable Magic Millions Sprint winners include Viddora (2018), Temple Of Boom (2011) and Straturbo (2015). The race distance was recently increased to 1200m and the prize money boosted to $1 million.