Kacy Fogden’s speed colt Best Of Bordeaux made it two-from-two with a brilliant victory in the Group 2 $250,000 Silver Slipper Stakes (1100m) at Rosehill ahead of the upcoming 2022 Golden Slipper Stakes next month. 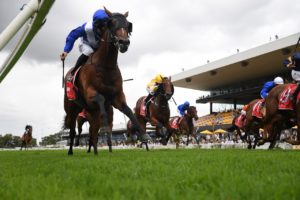 The well-bred son of Snitzel backed up from an impressive 4.63 length win on debut in the Group 3 Canonbury Stakes (1100m) at the track in late January to remain unbeaten in the 2022 Silver Slipper Stakes results.

Jockey Sam Clipperton retained the ride on the progressive bay who, after putting his rivals away with ease, now goes straight into the Group 1 $5 million Golden Slipper (1200m) back at the track on March 19 exempt from ballot for the world’s richest two-year-olds’ race.

“It was a race with many variables before. When Tim Clark and Rachel (King) were going quick, I began quick and going into that chute I had a decision to make because I really couldn’t just sit there. I thought I will keep him rolling, keep him happy and he came back under me. One of the amazing things about this horse is that he’s so little but he can quicken so sharply,” winning hoop Clipperton told the media post-race.

“I would have loved to have stayed on the rail coming into the straight but the way the track is playing I came out a bit. He was no, no we’re going back to the inside. I just let him drift back down there.

“He was getting a bit tired late which he was entitled to but that just proves his Canonbury win was no fluke and he felt even better today.

“Impressive horse and well done to Kacy and the team. He’s a live Slipper chance now.”

There was a fierce battle for the lead the early stages with a host of youngster racing out wide challenging for the front.

Eventually Clipperton won the fight and got Best Of Bordeaux into the lead on the inside of the Peter & Paul Snowden-trained filly Ebhaar who was racing outside in second before eventually fading the closing stages to run dead last.

First into stride after jumping away well from the inside alley, Richard & Michael Freedman’s Group 3 Widden Stakes winning filly Queen Of The Ball was forced to take the sit in third.

Racing away to a three-length lead on the straight, Best Of Bordeaux’s winning margin was reduced to a half-length by the fast-finishing Hawkes Racing-trained roughie Magic first-up who produced a huge run fresh to fly into second.

In third rounding out the Silver Slipper Stakes trifecta was Cythera over on the inside with William Pike aboard Team Snowden’s Lonhro Plate winning daughter of I Am Invincible.

“We were a little bit worried there, we were quite close to the rail, it was borderline but I think it speaks to the horse.

“He has obviously got quite a lot of ability and he has slightly defied the odds there. He is just very free-running so although he was three-deep and out wide, the key there, and Sam (Clipperton) knows that, is just to let him run along.

“There was pressure but it was all about that rhythm. If he gets held up or choked up, it will be a different story. He is very free running and I think that’s the key.”

That extra prize money may not be enough to convince Fogden to give Best Of Bordeaux another run before his grand final however.

“I had in my head that we perhaps wouldn’t and we would back off and maybe trial if we needed to. He’s not an overly big horse, he is very clean-winded,’’ she said.

“But tradition would probably tell us another run wouldn’t go astray. We will just see how he pulls up and lets the horse tell us.”

All-in Golden Slipper 2022 betting markets this Sydney Autumn Racing Carnival have Best Of Bordeaux in from $17 to $10 to be the next and are available in full here.