Summer’s always-popular $10 million Magic Millions Race Day 2022 lights-up the Gold Coast Racecourse in Queensland today, Saturday January 15, and below we take a look at the latest scratchings and track report ahead of the first on the “glitter strip”. 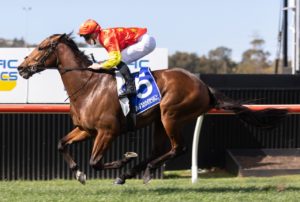 King Of Sparta is one of the standout runners in the $2M Magic Millions 3YO Guineas on the Gold Coast today. Photo: Steve Hart.

The weather south of Brisbane today is fine and without any rain on the radar the Gold Coast track rating has been upgraded from a Soft (5) earlier in the week to an ideal Good (4) racing surface for the big day.

Race 4 sees the female gallopers do battle in the $1 million Magic Millions Fillies & Mares (1300m) featuring Group 1 Coolmore Classic winner Krone, the field down to 13 with the withdrawal of Miami Fleiss (2) and Boomnova (3).

It is the sprinters’ turn in Race 5 with the $1 million Magic Millions Snippets (1200m).

The 2022 Magic Millions Snippets field is down to 13 with the scratching of Beau Rossa (10) who instead contests the Magic Millions Cup later in the day.

Updated Magic Millions Sprint betting at Ladbrokes.com.au has the rails-drawn Away Game on top, the now four-year-old having won the Magic Millions 2YO Classic as a filly on this day back in 2020.

Punters are in for a quality edition of the Magic Millions Cup featuring the likes of The Buffering winner Kementari, the ultra-consistent but widely-drawn Apache Chase and reigning champion Eleven Eleven who is a Magic Millions specialist.

The prize money increases for Race 7 at 4:00pm (AEST) with the juveniles facing off in the $2 million Magic Millions 2YO Classic (1200m), betting for which is dominated by undefeated and dual Group 3 winning filly Coolangatta.

The three-year-olds then get their turn next-up at 4:45pm (AEST) and an open edition of the $2 million Magic Millions 3YO Guineas (1400m) has Jamaea and King Of Sparta battling for favouritism.

See below for the complete Magic Millions Day 2022 race program, jump times and scratchings before heading to Ladbrokes.com.au for all the top summer racing odds and offers.

*All times quoted are local (AEST) and subject to change