The Chipping Norton Stakes is a Group 1 Sydney race run early during the Autumn Racing Carnival dominated in 2016-19 by glamour mare Winx who won her third by 7 lengths and record fourth in 2019 before retirement. 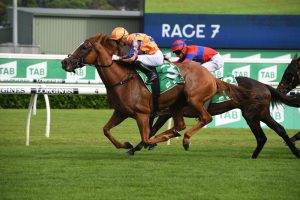 The Chipping Norton Stakes is a Group 1 weight-for-age race held at Royal Randwick Racecourse during the Sydney Autumn Racing Carnival. It is one of Sydney’s first Group 1 races of the year and offers $600,000 in prize money.

The 2020 Chipping Norton Stakes ran on Saturday February 29, 2020 and saw the well-backed Kiwi Te Akau Shark salute for the punters.

The latest Chipping Norton Stakes 2020 betting odds on the weight-for-age autumn hopefuls will be found below as soon as released by Ladbrokes.com.au.

The Chipping Norton Stakes field features a host of smart autumn milers and is released on the Wednesday before the race.

The official 2020 Chipping Norton Stakes field and barriers are released on Wednesday February 26, 2020 and will be published below.

For the first time in five years the Chipping Norton Stakes 2020 field is a Winx-free affair and the event has attracted a bumper 14 horse line-up led in betting by last year’s Cox Plate third placegetter Te Akau Shark. The Group 1 winning Kiwi is second-up and comes off a lead-up win at home. Following a first-up second in the Group 2 Apollo Stakes, Dreamforce looks the danger here in gate four.

Update: Only 13 weight-for-age hopefuls remain in the mix after trainer Chris Waller withdrew one of his entries – #14 Danzdanzdance (3). Waller is still in line to score his incredible ninth victory in 11 years with four runners, but only the Group 1 winning mare Verry Elleegant ($26) is under triple-figures for the stable.

Other notable Chipping Norton Stakes winners include Danleigh (2011), Shoot Out (2012-13) and of course the world’s best mare Winx (2016-19) who posted four straight wins in the race including a seven length romp home in 2018.

See below for the Chipping Norton Stakes winners dating back to 2000.