The Tesio Stakes is a Group 3 mile event held at Moonee Valley Racecourse on Cox Plate Day and was known as the Powerflo Solutions Stakes in 2017. 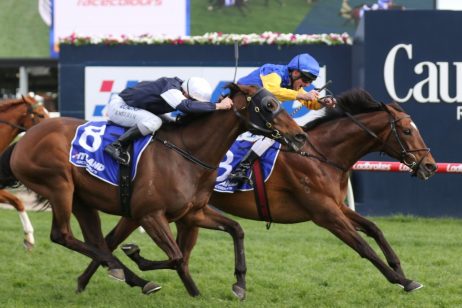 The Tesio Stakes – known as the Powerflo Solutions Stakes in 2017 – is a Group 3 event held at Moonee Valley Racecourse in Melbourne during the Spring Racing Carnival. This race is sometimes referred to as the Eliza Park International Stakes, and was previously known as the Inglis Mile, while in 2016 the Tesio Stakes ran as the Merlin Garage Door Openers Stakes for sponsorship purposes.

Raced over 1600m, the Tesio Stakes is a handicap for mares aged four years and older and pays $150,000 in total prize money.

Following the Tesio Stakes there are a variety of options for mares to take. The classier types might head to the Group 1 Myer Classic (1600m), while the Group 2 Matriarch Stakes (2000m) is also a popular target for those mares not at Group 1 level. Zanna (2003) was the last mare to complete the Tesio Stakes – Myer Classic double.

Check out the full Tesio Stakes 2017 Results & Finishing Order below, following the link to read more about the all-the-way win by Lubiton who turned the tables on the beaten favourite Invincibella (3rd), handing jockey Blake Shinn back-to-back wins on Cox Plate Day. It was a photo for the minor placings, Savapinksi just holding off the in-form Chris Waller-trained Invincibella who missed the kick and was never in a striking position to salute for the punters.

OREGON’S DAY ($3.60) remains value and really feel like it is finally this Mick Price-trained four-year-old’s turn. She has winning form at the track / distance and will enjoy getting back to a mile for the first time since crossing only 1.9L off Foxplay in the autumn’s Group 1 Queen Of The Turf Stakes (1600m). Lead-up fifth in the Weekend Hussler was brave from the outside barrier (13 of 13) and under two lengths beaten. Fit and ready to get the job done in a smaller field against her own kind down in weight. FRENCH EMOTION ($11) is in gate three with Hugh Bowman riding, the hoop in for a huge day riding Winx in the Cox Plate 2017. First-up she was 2.85 L back eighth in Flemington’s Blazer Stakes, this is a drop in class and she’s got two placings from four goes at a mile. Winner at The Valley, better second-up and drawn well to boot. INVINCIBELLA ($2.80) on the rails and flying looking for a third win on the trot at Rosehill and Randwick. She’s the deserving favourite looking at the form and the draw from the Waller stable and has placed at Moonee Valley before.

The latest Tesio Stakes odds will listed below, pricing provided by Ladbrokes.com.au, for punters to lock in their Tesio Stakes betting tips at the best Cox Plate Day odds.

Each spring the Tesio Stakes field attracts a smart line-up of mares possibly looking to back-up the following Saturday at Flemington in the Group 1 Myer Classic field. Mares to have completed the double include Zanna (2003), Western Chorus (1991) and Echo Lass (1989). In 2013 the Tesio Stakes winner Catkins finished runner-up in the Myer Classic on VRC Derby Day, as did Lady Lynette in 2009. Lady Lynette also returned to win the 2010 Tesio Stakes, a race that often attracts similar line-ups of mares on back-to-back years.

The 2017 Tesio Stakes field are released on the Wednesday leading up to Cox Plate Day and will be provided in full below once announced.

In 2017 the Tesio Stakes field is known as the Powerfulo Solutions Stakes and attracted just a nine-starter field of mares including the Chris Waller-trained top weight French Emotion (58kg) looking to improve on a lead-up eighth in the Blazer Stakes and her in-form stablemate Invincibella looking for a third straight after successive victories in Sydney.

The 2017 Tesio Stakes nominations are released by Racing Victoria on the Monday of Cox Plate week and will be announced below as soon as available.

The Powerflo Solutions Stakes 2017 Nominations attracted a bumper 18 early entries including the Chris Waller-trained dual Oaks winner Egg Tart and her stablemates French Emotion and Omei Sword. Invincibella is also Waller-trained and nominated for the race chasing a third win on the trot this spring, while Petition could back-up off a fourth to Global Glamour in last weekend’s Group 2 Tristarc Stakes (1400m) on Caulfield Cup Day.

Inaugurated in 1988, the Tesio Stakes has seen quite a few classy mares pass through. The Tesio Stakes was a listed race between its inception in 1988 and 1993. In 1994, it gained Group 3 status, which it has retained since.

There was a dead heat for two years running. In 2007, Maslins Beach and Autumn Jeuney tied at the post, with Miss Badoura and Bird Of Fire doing the same in 2008. The 2008 edition also saw the next two runners, Permission To Land and Princess Marizza, tie for third only 0.2 lengths off the lead.