The How Now Stakes is a Group 3 event held at Caulfield Racecourse on Naturalism Stakes Day during the Melbourne Spring Racing Carnival. 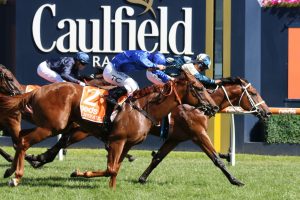 The How Now Stakes is a Group 3 sprint race run at Melbourne’s Caulfield Racecourse during mid to late-September each year. The How Now Stakes forms an integral part of the Melbourne Spring Racing Carnival and is open only to mares aged four-years-old and over.

The How Now Stakes shares the race card with the Group 3 Naturalism Stakes (2000m), which offers a Caulfield Cup ballot exemption to the winning stayer, along with the Group 1 Sir Rupert Clarke Stakes (1400m).

Raced over 1200, the How Now Stakes is held under set weights with penalties conditions and offers $160,000 in total prize money.

Jockey Craig Williams made it a hat-trick of wins on Sir Rupert Clarke Stakes Day saluting in the last aboard Felicia who drew clear over the final 100m for a powerful two length success second-up in the 2020 How Now Stakes results.

The spring’s top How Now Stakes 2020 betting odds and Group 3 Caulfield racing links to Ladbrokes.com.au will be provided below the week leading up to Naturalism Stakes Day.

The How Now Stakes field attracts a line-up of quality mares each Melbourne Spring Racing Carnival, many coming off a lead-up run at the same track / distance in the Group 3 Cockram Stakes (1200m) a fortnight earlier.

Many mares often kick-off their spring campaigns in the How Now Stakes field first-up following autumn – winter preparations that may have included runs in tougher races including Brisbane’s Group 1 Tattersall’s Tiara (1350m).

The official 2020 How Now Stakes Final Field & Barriers are released on the Wednesday of race week and will be published in full below.

The How Now Stakes 2020 field features a quality line-up of 13 mares led in betting by Anthony & Sam Freedman’s Group 1 winner Lyre looking to return to winning form after a string of frustrating minor placings in tough company.

Nominations for the How Now Stakes close the Monday leading-up to Sir Rupert Clarke Stakes Day and will be published below.

The 2020 How Now Stakes nominations attracted a bumper 25 mares including the flying Diamond Effort chasing a sixth win on the trot following a first-up victory in the Group 3 The Heath and Group 1 winner Lyre coming off a second in the same lead-up.

The How Now Stakes was inaugurated in 1999, with Snippet’s Lass taking out the race that year. While the How Now Stakes doesn’t hold the long and storied history of other Caulfield events, it still stands up on its own as a respectable and worthy event.

In 2005 there was a dead heat between Sarah Michelle and Brindabella. In the same year, the How Now Stakes was upgraded from a listed race to a Group 3 event, a status it has retained since.

The How Now Stakes has been known by a variety of names throughout its short history. These include the Cranbourne Diahatsu Stakes, Dubai Convention Bureau Stakes, Dubai International Stakes and Emirates Racing Association Stakes. In 2006, the How Now Stakes returned to its correct name. Then in 2013, the race became known as the Sportingbet Sprint Series Heat 2, a name that it continued to hold throughout 2014.