Godolphin’s last-start The Buffering winner Kementari has retained narrow favouritism to keep the wins coming in Saturday’s 2022 Magic Millions Cup at the Gold Coast despite carrying the hefty 61kg top-weight in the Restricted Listed feature. 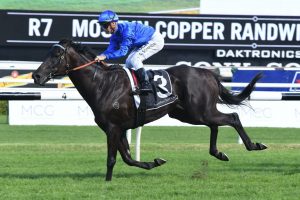 Kementari is one of the key horses in Saturday’s 2022 Magic Millions Cup field at the Gold Coast. Photo: Steve Hart.

Heading the latest Magic Millions Cup odds online at Ladbrokes.com.au is the James Cummings-trained Kementari at $5 jumping from gate four with Nash Rawiller in the saddle.

Saturday marks the horse’s first start at the Gold Coast track, but the bookies are taking no chances tipping Kementari as the class runner and one to beat.

The danger occupying the second line of Magic Millions Cup betting at $6 is the Desleigh Forster-trained Apache Chase who suffered a blow drawing extremely wide (21).

The ultra-consistent Better Than Ready four-year-old is yet to run a place from two previous Gold Coast starts, but has an excellent record at the distance (9:6-0-1) and form around some of the country’s top runners.

He was fourth in the $7.5 million Golden Eagle (1500m) at Rosehill last October before victory in The Gateway at Eagle Farm in December.

His lead-up third in The Buffering in the wet was promising and he remains in with a chance despite the draw.

She chases her first win since the $500,000 Sapphire Stakes at Eagle Farm last June, which she backed-up from to run second behind Tofane in the Group 1 Tattersall’s Tiara.

Nudge has raced consistently since placing in events including the $1 million The Gong (2nd) and Listed Nudgee Handicap (3rd) on New Year’s Day at Doomben last time out.

Rounding out the single-figure chances are last year’s champion Eleven Eleven ($9.50 into $8) who is also the early market mover and the Will Clarken-trained Beau Rossa ($8.50).

Five-year-old Eleven Eleven won the Magic Millions 3YO Guineas in 2020 and last year’s Magic Millions Cup for a two-from-three Gold Coast record ahead of Saturday.

Beau Rossa meanwhile enjoyed a strong spring in Melbourne headlined by his Group 1 Memsie Stakes (1400m) second to Behemoth and was good fresh on Boxing Day when carrying 60kg for fourth in the Listed Falvelon at Doomben.

The 2022 Magic Millions Cup is set to run as the Gold Coast Race 6 at 3:15pm (AEST) with full markets courtesy of Ladbrokes.com.au available here.