The Gai Waterhouse & Adrian Bott-trained Yao Dash remains the firm favourite in Magic Millions Cup 2021 betting for the Gold Coast on Saturday with the top elect coming up trumps with barrier one for the $1 million feature. 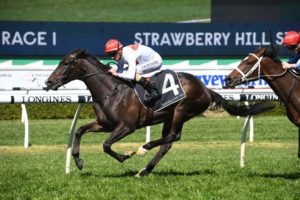 Yao Dash is favourite to win the 2021 Magic Millions Cup on the Gold Coast this weekend. Photo: Steve Hart.

Heading the Magic Millions Cup odds online at $3.90 through Ladbrokes.com.au, Yao Dash will jump from the inside alley with Brenton Avdulla in the saddle.

On the quick back-up and dropping two kilos to 54kg in the Magic Millions Cup field, the money suggests Yao Dash can win over 1400m at his fourth attempt at the distance and salute over further than 1300m for the first time.

The danger occupying the second line of Magic Millions Cup betting this Queensland Summer Racing Carnival at $5 is the Wyong Magic Millions 3YO & 4YO Stakes champ Eleven Eleven chasing a third straight win.

Jumping from a favourable barrier five gate, Gregory Hickman’s Fastnet Rock four-year-old was good two back in the Wyong feature with 59kg before saluting in the Listed Christmas Classic next start at Canterbury on New Year’s Day.

He goes back up from 54.5kg that day to 58.5kg on the weekend however so will need to be good to keep the winning streak going.

Along with Yao Dash, the Waterhouse-Bott stable also present with a $7 fancy in stablemate Discharged drawn wider in gate 14 with Jim Byrne to ride.

Despite the wide alley, the bookies are keeping the four-year-old son of Snitzel safe in betting as the horse looks to improve second-up after a narrow second to Eleven Eleven fresh in the Christmas Classic on January 1.

The other runner currently under $10 to win is the consistent Soxagon ($8.50) in barrier three with Glen Boss in the saddle.

That was his second straight win after an earlier Listed victory over 1350m at Doomben in December, but he goes up notably in weight with 59kg here.

Still, even with the extra kilos the galloper is undefeated at the Gold Coast (2:2-0-0) and could get the job done at good odds.

Of the double-figure runners those representing potential value include the drifting Leon & Troy Corstens-trained The Astrologist ($8.50 out to $10) who ran fourth to Yao Dash last weekend, recent December Handicap winner at Randwick Edison ($11) in gate four for jockey Ryan Maloney and the highly-rated Group 3 Festival Stakes champ Outrageous ($15) from the Hawkes Racing stable.