The Wyong Gold Cup is a Listed race held at Wyong Racecourse in early September as a lead-up to the Sydney Spring Racing Carnival. 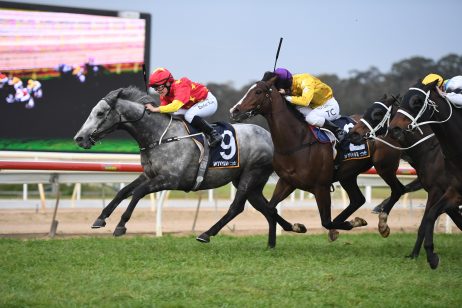 Newcastle Next for Wyong Gold Cup Winner Paths Of Glory

The Wyong Gold Cup field is usually comprised of horses from Sydney stables, with those who have a successful run going on to compete in both Sydney and Melbourne Spring Racing Carnivals.

In 2011, for example, The Verminator went from a victory in the Wyong Gold Cup to win the Metropolitan Handicap and compete in the Melbourne Cup.

The Wyong Gold Cup forms part of the Wyong Racing Festival and is the feature race of Wyong Cup Day. There is a second black-type event on the program, the listed Mona Lisa Stakes.

Many horses out of the Wyong Gold Cup target the Group 3 Newcastle Gold Cup (2300m) a fortnight later and Carzoff (2018) was the last stayer to do the double.

The 2021 Wyong Gold Cup ran on Friday September 3, 2021 and was won by the John O’Shea-trained Berdibek.

The John O’Shea-trained Berdibek ($5.50) continued his strong form backing-up from a Rowley Mile win to dominate the Wyong Gold Cup 2021 results with a terrific late run.

The latest Wyong Gold Cup 2021 odds and betting market links to Ladbrokes.com.au will be provided below the week of the race.

The Wyong Gold Cup field attracts a quality line-up of mostly Sydney-trained stayers, many of which have competed in previous editions of the race.

Horses may be kicking off a new campaign in the Wyong Gold Cup field after a winter season that included a run in the Grafton Cup (2350m) during July. Rosehill’s Group 3 Premier’s Cup held on San Domenico Stakes Day is also a good lead-up into the Wyong Cup field.

The official Wyong Gold Cup Field 2021 will be published below as soon as announced by Racing NSW the week of the race.

Nominations for the Wyong Gold Cup 2021 close the Monday of race week.

The Wyong Gold Cup first ran in 1978 and was taken out by Taksan. For the inaugural edition, the Wyong Cup was raced over a mile (1600 metres). It has run every year since except for 2007, when equine influenza greatly disrupted the New South Wales racing calendar.