The Kennedy Cantala is one of the four Flemington Group 1 races contested on Day 1 of the Melbourne Cup Carnival - Victoria Derby Day. 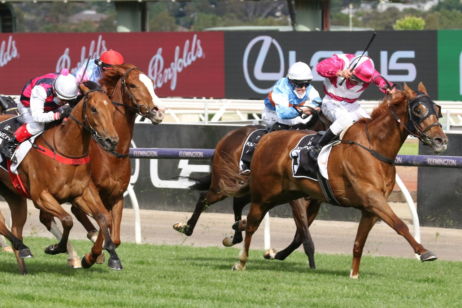 The Kennedy Cantala – briefly known as the Kennedy Mile and previously known as the Emirates Stakes / Longines Mile / Cantala Stakes – is Melbourne’s richest 1600m race for the spring with $2 million prize money as of 2021. This Group 1 race – briefly called the Longines Mile for sponsorship purposes – is a quality handicap raced at Flemington on the first day of the Melbourne Cup Racing Carnival.

The event runs on Victoria Derby Day on the Saturday before the Melbourne Cup, which takes place on the first Tuesday of November, along with three other Group 1 races.

The 2021 Kennedy Cantala ran on Saturday October 30, 2021 and was won in a thrilling photo-finish by the Danny O’Brien-trained Superstorm at 7/1.

Jockey Damien Oliver needed every inch of the Flemington mile to salute in the 2012 Kennedy Cantala results but he got there right on the line aboard the ultra-consistent Superstorm ($8) who just held out the previous weekend’s $2 million The Invitation winning mare out of Sydney Icebath. In third was Cascadian ($13), the Godolphin galloper having also run second in 2019 and third in 2020.

Click here to read more on the thrilling 2021 Kennedy Cantala win by Superstorm.

The season’s latest Kennedy Cantala 2021 Odds and market links to Ladbrokes.com.au will be available below as soon as available.

The Kennedy Cantala field is normally comprised of the horses from the Group 2 Crystal Mile (1600m) run at Moonee Valley on Cox Plate Day the weekend before and graduates of the Group 1 Toorak Handicap (1600m) run at Caulfield at the start of October on Caulfield Guineas Day. Fierce Impact (2019) was the last galloper to complete the Toorak Handicap – Kennedy Cantala double in a single season.

The official Kennedy Cantala 2021 Final Field & Barriers are set for release on the Wednesday leading-up to Victoria Derby Day, the full list of milers to be published in full below once announced.

A bumper line-up of milers are engaged for Saturday’s 2021 Kennedy Cantala field including in-form Seymour Cup winner Mr Brightside dominating the markets and Icebath on the quick back-up out of her $2 million The Invitation win in Sydney.

Click here to read more on the key runners in the Kennedy Cantala 2021 field and betting markets.

The early Kennedy Cantala Nominations close  the Monday of race week and will be updated right here once early entries are confirmed.