The VRC Sprint Classic runs on Mackinnon Stakes Day, as part of the final day of the Melbourne Cup Carnival at Flemington Racecourse each November. 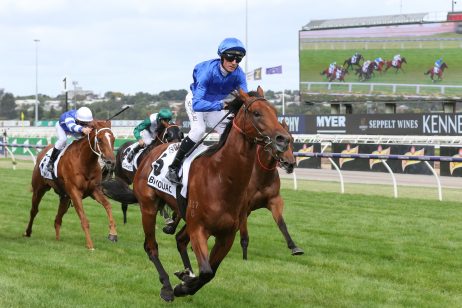 The VRC Sprint Classic, currently called the Darley Sprint Classic and formerly the Patinack Farm Classic due to sponsorship, is a 1200m sprint race run down the famous Flemington straight during the spring.

Held on the first Saturday of November on the final day of the Melbourne Cup Carnival, the VRC Sprint Classic is the premier sprint race of the Melbourne Spring Racing Carnival and is currently worth $1,500,000 in prize money.

The Group 1 VRC Sprint Classic is part of the Global Sprint Challenge, an initiative to bring together the best sprinters in Australia, Japan, United Arab Emirates, Singapore, United Kingdom and Hong Kong. The 10 leg Global Sprint Challenge offers a $1,000,000 bonus to any horse that can win one of the sprint races in three different countries. So far no horse has claimed the bonus.

The race, held on Mackinnon Stakes Day, is now the perfect target race for horses out of the world’s richest turf race – the $15 million The Everest (1200m) in Sydney the month before.

The 2020 VRC Sprint Classic ran on Saturday November 7, 2020 and was dominated by the favourite Bivouac.

The James Cummings-trained Bivouac ($3.20F) became the fourth straight horse to win the 2020 Darley Sprint Classic off a lead-up The Everest (2nd) run saluting for the punters with a runaway three length victory over last year’s champ Nature Strip.

Horses may come into the VRC Sprint Classic field via a number of different early Melbourne Spring Racing Carnival sprint races, but the Group 1 Manikato Stakes (1200m) has proven the key lead-up race with Buffering (2013) the last horse to complete the double.

A star-studded line-up of 10 do battle in the 2020 Darley Sprint Classic field that features the past two winners of the event: Santa Ana Lane from 2018 and last year’s champion Nature Strip attempting successive wins for the first time since the mighty Black Caviar (2010-11).

Click here to read more on the key contenders in the 2020 VRC Sprint Classic field.

A number of horses have won the race multiple times including most recently the undefeated mare Black Caviar (2010-11).