All eyes will be on the flying Seymour Cup winner Mr Brightside in his hunt for seven-straight on Saturday going up in class for the Group 1 $2 million Kennedy Cantala (1600m) on Derby Day. 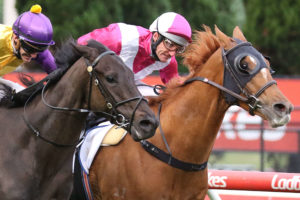 With just 52kg the favourite in Kennedy Cantala betting at Ladbrokes.com.au looks very well weighted to win as he goes up notably in grade at Flemington on the big stage.

After the Seymour Cup form was franked on Cox Plate Day by fifth-placed Just Folk, the markets have firmed further on progressive four-year-old Mr Brightside to win for Ben & JD Hayes.

But with the favourites in Kennedy Cantala betting only having a moderate strike-rate in recent years, is there value to be found further down the markets?

It’s an open race outside the top elect who faces an acid test here with the likes of Chaillot ($8.50), last weekend’s inaugural $2 million The Invitation winner Icebath ($10) and Quantum Mechanic ($19) looking to become just the fourth mare since 2000 and the first since Shillelagh (2017) to beat home the boys.

Add into the mix last start Group 1 Epsom Handicap runner-up Aramayo ($8) for the race’s four-time winning trainer Chris Waller and the autumn’s Doncaster Mile champ Cascadian ($12) and we’ve certainly got a race on our hands.

Read on for our insider Kennedy Cantala 2021 betting tips before heading to Ladbrokes.com.au to lock in your Derby Day selections.

No doubt Mr Brightside brings all the momentum into the Kennedy Cantala this year and is deserving of top spot in the markets. He has won his last six on the trot and is drawn a treat looking to extend his winning streak to seven straight from barrier six. Craig Williams is booked to ride the Ben & JD Hayes-trained son of Bullbars who still looks to have plenty of upside. The four-year-old was last seen with Williams aboard carrying 54kg to a 2.25 length win in Ballarat’s Listed Seymour Cup (1600m). He comes down to just 52kg here and is looking to further frank the form out of that race after Just Folk (5th) won last weekend’s Crystal Mile. Soft track form is excellent (5:4-1-0) and no reason he can’t handle this rise in grade.

Although the favourite is ticking plenty of boxes, going out on a limb and suggesting Superstorm can break through and return to winning form in an upset here at double-figures. The Danny O’Brien-trained son of Sebring was good second-up winning the Group 2 Feehan Stakes over the mile at WFA before his third to spruik galloper Zaaki – sensationally scratched from last weekend’s Cox Plate as the pre-event favourite – in the Underwood Stakes over 1800m. Followed that running third to I’m Thunderstruck (favourite for the $7.5 million Golden Eagle in Sydney on Saturday) in the Group 1 Toorak Handicap (1600m) on October 9. Kept fresh since, carries 56kg, just needs to handle the wide draw (14 of 16).

As mentioned, Just Folk came off a Seymour Cup fifth to Saturday’s favourite to win the Group 2 Crystal Mile (1600m) at The Valley on Cox Plate Day. That was a massive thrill for young Bendigo horseman Josh Julius who now saddles-up a Derby Day contender with the Magnus five-year-old on the quick back-up. Was four lengths off Mr Brightside at Ballarat, but was so good with 59kg at WFA in the Crystal Mile and looks to be firing on all cylinders now. The 30/1 odds for the Cantala are generous and a top three run would not surprise.