The Danny O’Brien-trained Perth expat Superstorm finally posted a well-deserved Group 1 win in a thrilling photo finish in the 2021 Kennedy Cantala Stakes with Damien Oliver getting the horse over the line by the bob of the head. 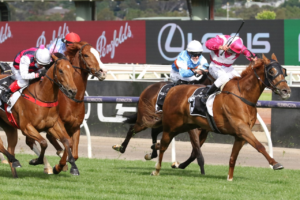 There was nothing in the last Group 1 on Derby Day with a host of runners crossing the line in a blanket finish in the $2 million Kennedy Cantala (1600m).

It was a typically high-pressure edition of the mile showdown and top honours went to Superstorm, the Sebring five-year-old further franking the form out of Caulfield’s Group 1 Toorak Handicap (1600m).

It was a similarly exhilarating finish in Melbourne’s Kennedy Cantala as Superstorm narrowly denied last Saturday’s inaugural $2 million The Invitation winning mare Icebath who was second in yet another Group 1 race.

The James Cummings-trained Cascadian with 57.5kg ran a nice third at 12/1, while the Ben & JD Hayes-trained beaten favourite Mr Brightside ($5) lost few admirers under a quarter-length back for fourth.

The move from owner Bob Peters to divert from an original Group 1 Cox Plate (2040m) target at The Valley in order to see Superstorm run in the big mile race at Flemington a week later proved the right call.

“He’s a really, really nice horse that’s raced at the top level his whole carer so it’s great for him to get a Group 1 particularly on Derby Day,” O’Brien told Racing.com after the race.

“Bob tossed up running him in the Cox Plate, but was keen to see him at Flemington.

“We thought a high-pressure mile was the perfect set-up for him.”

In typical Oliver style, the hoop had Superstorm settled well back as Buffalo River led the Kennedy Cantala field around at a solid tempo.

The leader and Just Folk settled second had a big gap on the rest of the runners before they bunched around the turn for home.

Driving through on the straight was the Doncaster Mile winner Cascadian coming up on the rails just ahead of the favourite Mr Brightside ridden by Craig Williams.

But in an extraordinarily tight finish, it was Oliver who secured both the Group 1 miles on Derby Day having also ridden Colette to victory in the Empire Rose Stakes for Godolphin getting there with another duck and weave ride.