The Grand Prix Stakes is a Group 3 race held at Eagle Farm Racecourse in late December having been moved from its previous position on Kingsford Smith Cup Day. 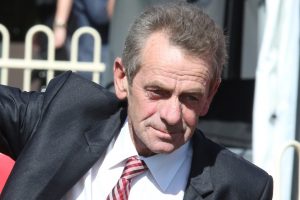 The Grand Prix Stakes is a Group 3 race held annually at Eagle Farm Racecourse from 2017 having previous been run at Doomben.

Once held on the Kingsford-Smith Cup raceday in May over the Brisbane Winter Racing Carnival, the race was moved to summer time slot in 2019. Officially there will be two 2019 Grand Prix Stakes, the first held in the winter and won by Fun Fact and the second contested at the end of December.

The Grand Prix Stakes is open only to three-year-old staying types, the set weights showdown now offering a lucrative $250,000 in total prize money.

Contested over 2200m, the event once held Group 2 status and when run in the winter served as a good guide to the Group 1 Queensland Derby (2400m) run back at the Eagle Farm track a fortnight later on Stradbroke Handicap Day.

The second edition of the 2019 Grand Prix Stakes ran on Saturday December 21, 2019  having been moved from the winter to its own feature race day in December and was won by the odds-on favourite Chains Of Honour.

Despite getting caught deep and racing wayward on the home straight, the Gerald Ryan-trained odds-on favourite Chains Of Honour ($1.90) was far too strong for his rivals in the Grand Prix Stakes 2019 results. After charging home for a 2.5 length win in the Group 3, Ryan is talking of potential 2020 Group 1 targets for Chains Of Honour including the Queensland Derby in May and Randwick’s Australian Derby (2400m) in April.

Read more on the messy but powerful 2019 Grand Prix Stakes win by Chains Of Honour.

The season’s top Grand Prix Stakes 2019 betting odds and market links to Ladbrokes.com.au on the now summer racing feature in Brisbane will be provided below the week of the race.

The Grand Prix Stakes 2019 Final Field & Barriers are set for release on the Wednesday of race week and will be published in full below once announced by Racing Queensland.

The 2019 Grand Prix Stakes field features a dozen youngsters including the Gerald Ryan-trained Chains Of Honour and fellow interstate visitor Mission Phoenix for the in-form trainer Mark Newnham who are battling for top spot in the markets on the quarter-of-a-million-dollar showdown.

The Grand Prix Stakes was originally held at Eagle Farm before being shifted to Doomben Racecourse in 2010. From 2017 onward the race returned to its inaugural home and joined the Kingsford Smith Cup Day card. Inaugurated in 1971 when Mode won, a number of renowned horses can be found among the Grand Prix Stakes results. These include Balmerino (1976), Surround (1977), Kingston Town (1980) and Sirmione (2007).

The Grand Prix Stakes race distance has changed multiple times, and has only retained its current distance of 2200 metres since 2009.

Grand Prix Stakes results since 2000 are listed below.