The Group 2 Skyline Stakes is a 1200m sprint for 2YO colts & geldings run at Royal Randwick on Chipping Norton Stakes Day in the autumn as a key lead-up to the Golden Slipper Stakes. 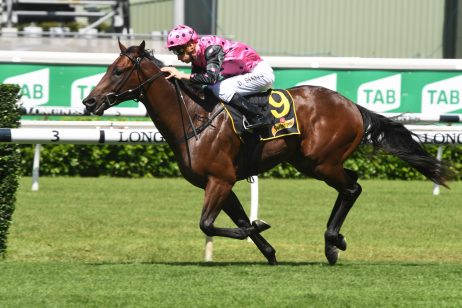 Colts & geldings running in the Skyline Stakes field may have come off an earlier autumn run in a traditional lead-up including the Group 3 Canonbury Stakes (1100m) at Rosehill in late January or the Group 2 Silver Slipper Stakes (1100m) the week before.

More recently, the 2019 Skyline Stakes winner Microphone went on to run second in that year’s Golden Slipper Stakes before winning the Group 1 ATC Sires’ Produce (1400m) over more distance during ‘The Championships’.

The Skyline Stakes 2020 ran on Saturday February 29, 2020 and was won by the John Thompson-trained Mamaragan on debut.

Trainer John Thompson has uncovered a genuine Golden Slipper contender in Mamaragan with the colt scoring an impressive upset win on debut in the Skyline Stakes 2020 results ahead of Chris Waller’s $1.7 million purchase Osamu and the better-fancied Aim.

The latest Skyline Stakes 2020 betting odds provided by Ladbrokes.com.au will be available for selection below as soon as markets on the official Golden Slipper Stakes lead-up are out the week of the race.

The Skyline Stakes field attracts a line-up of the season’s most promising two-year-old sprinters, the colts and geldings traditionally targeting a start in the upcoming Golden Slipper Stakes field.

The official 2020 Skyline Stakes field and barriers will be released by Racing NSW on the Wednesday of race week and published in full below.

The Skyline Stakes has been run since 1979 as a Golden Slipper Stakes lead-up. The race is named in honour of the 1958 Golden Slipper winner Skyline who also won that season’s Australian Derby.

The race has taken place over a number of different Sydney race tracks over its history including Canterbury Park, Rosehill, Warwick Farm and its current home at Randwick Racecourse. It began as a Principal Race (1979) before upgrades to Listed (1980-86), Group 3 (1987-2012) and now its current Group 2 (2013 onwards) status.

Check out the table below for the full Skyline Stakes results & winners dating back to 2000.