The Bill Stutt Stakes (1600m) is a Group 2 race held at Moonee Valley Racecourse in late September on Moir Stakes Night as a lead-up to the Caulfield Guineas. 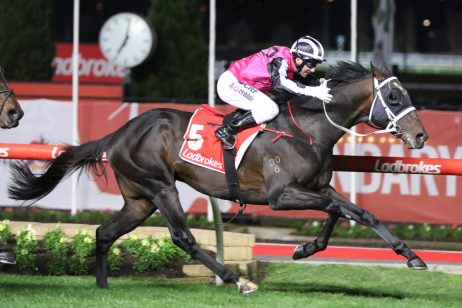 Worth $200,000 in prize money, the set weights race is open to all three year old horses. Colts and geldings must carry 55.5kg, while fillies are required to carry 53.5kg. Run over a mile distance, the Bill Stutt Stakes in held two weeks before the Group 1 Caulfield Guineas (1600m), but Whobegotyou (2008) was the last to do the double. More recently, the 2017 Caulfield Guineas winner Mighty Boss also came out of the Stutt Stakes having run fourth in the Group 2.

The latest Bill Stutt Stakes odds and betting markets for the Moir Stakes Night Group 2 will be listed below complete with links to Ladbrokes.com.au for you to lock in your early Stutt Stakes betting tips at the right price.

The Bill Stutt Stakes field attracts a quality field of young milers each season that could be looking to return to the mile at Caulfield Racecourse in a fortnights’ time in the Group 1 Caulfield Guineas (1600m), a race Pierro (2012) ran second in after a lead-up Stutt Stakes win. For the best three-year-olds in the Stutt Stakes field, the iconic Group 1 Ladbrokes Cox Plate (2040m) could also be on the spring agenda.

The official 2020 Bill Stutt Stakes Final Field & Barriers are released on the Wednesday of race week and will be provided for punters in full below.

The 2020 Bill Stutt Stakes nominations are released on the Monday leading up to Moir Stakes Night.

First won by Titanium in 1934, the Bill Stutt Stakes was originally named the Moonee Valley Stakes until 1990. Originally an eight furlong race, the distance was changed to 1600m in 1972. In 1979 it then changed from Principal race straight to Group Two status.