The Winterbottom Stakes runs at Ascot Racecourse during the Perth Summer Racing Carnival. 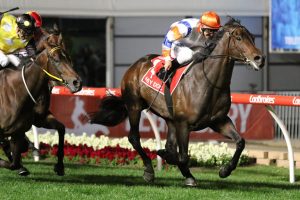 The Group 1 2019 Winterbottom Stakes is 1200m sprint held in late November or early December annually at Ascot Racecourse in Perth. Run under weight-for-age conditions, the contenders aged three-years-old and up compete for the lucrative prize purse of $1 million.

The event is conducted on Day 2 of the major Perth Summer Racing Carnival in Western Australia, which also features the Group 1 Railway Stakes (1600m) the weekend before and the Group 1 Kingston Town Classic (1800m) the following Saturday.

As the premier sprint event in Perth, entries are generally handy local sprinters and the Group 3 Colonel Reeves Stakes (1200m) at the same track and distance a fortnight earlier is a key lead-up.

With the race growing in prize money and prestige, interstate raiders are more commonly making the trip over to WA to take on the locals in the Winterbottom Stakes field with Melbourne races producing seven of the Winterbottom Stakes winners from 2011-2019 most recently Viddora (2017) who improved on a lead-up fourth in the Group 1 Ladbrokes Manikato Stakes (1200m) at Moonee Valley, Voodoo Lad (2018) who ran eighth in the Manikato before winning that year’s Winterbottom and comeback galloper Hey Doc (2019) who finished third in Sandown’s Group 3 Kevin Heffernan Stakes.

Runners that do well in the Winterbottom Stakes may stay on for other weight-for-age events in Perth including the Group 3 AJ Sachill Stakes (1400m) a fortnight later.

The 2019 Winterbottom Stakes ran on Saturday November 30, 2019 and was won in an upset by all-the-way hero Hey Doc.

The Winterbottom Stakes 2019 results saw a return to form for comeback galloper Hey Doc who celebrated his first win since the 2017 Manikato Stakes. Racing second-up off an injury-enforced break, the now six-year-old led all the way from the wide barrier to charge home over two lengths ahead of the track specialist Vital Silver (2nd) and veteran 10-year-old Rock Magic (3rd).

The latest Winterbottom Stakes 2019 odds will be listed below on the sprinters facing off in the field this summer complete with links to the markets at Ladbrokes.com.au on the Group 1 sprint classic.

The final 2019 Winterbottom Stakes field is announced by Perth Racing on the Monday of race week and will be available in full below once released.

The Winterbottom Stakes 2019 Final Field features 15 gallopers including three for Godolphin led by the race favourite Trekking coming off placings in The Everest and Redzel Stakes in Sydney.

The Winterbottom Stakes began as a principal race run over seven furlongs and was first run in 1952 when Raconteur claimed victory. In 1973 the race distance was converted to 1400m and the event gained Group 2 status in 1979. The length was decreased to its current 1200m sprint distance in 1993.

Since 2011 the Winterbottom Stakes has run as a Group 1 feature, having achieved elite level status.

Winterbottom Stakes results since 2000 can be found below.