Mornington trainer Jerome Hunter is considering a shot at the Group 1 $1 million Australian Guineas (1600m) against the boys with his classy filly Barb Raider after her first-up success in The Vanity 2022 results. 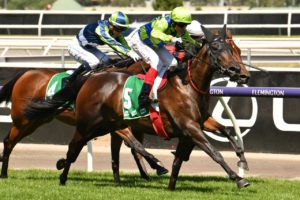 Barb Raider could take on the boys next-up in the Group 1 Australian Guineas after an impressive 2022 The Vanity victory. Photo: Ultimate Racing Photos.

The seventh filly in 10 years to salute in the race first-up for the autumn, Hunter’s nicely-bred daughter of Rebel Raider proved too good for her competition fresh in the Group 3 $200,000 The Vanity (1400m).

Jockey Craig Williams settled the $2.60 favourite one off the fence fifth in the run as the Clinton McDonald-trained Ancient Girl from the inside alley led The Vanity field around.

Around the turn for home, Ancient Girl was still in front with the Ciaron Maher & David Eustace-trained in-form Capitalist filly Socialist moving closer presenting as the threat up the middle of the track.

Williams came four-deep on Barb Raider who began to wind up 300m from the line, charging home to narrowly deny the fast-finishing Cardigan Queen also representing the Maher/Eustace stable.

The runner-up flashed home the final stages coming from last and widest on the turn into a brilliant second.

In a photo for third to complete The Vanity trifecta, the pace-maker Ancient Queen just got her nose down on the line ahead of last start $2 million Magic Millions 3YO Guineas placegetter Socialist in fourth.

Barb Raider, third behind Yearning in last October’s Group 1 Thousand Guineas (1600m), was the only filly resuming in The Vanity and put the writing on the wall for a big autumn ahead recording what was an arrogant victory in the end.

“Sensational. So much hard work at home,” Hunter told Racing.com after the win.

“It’s paid off. We’re not the biggest stable but we certainly try our hardest.

“You hope they come back and this whole preparation she’s just done everything 100%. Just her demeanour.

As for next-up options, Hunter confirmed plans to step Barb Raider back up to a mile, but whether that would be in the Australian Guineas back at Flemington on March 5 or not was yet to be decided.

“We’ll just keep going find a mile race and hopefully go to Sydney if she’s good enough and get some big races going,” he said.

“We’ll think about it (the Australian Guineas) but I like winning races easier than knocking on the door.”

Shamrocker (4th in 2011) and Mosheen (2nd in 2012) are the most recent Australian Guineas winning fillies to come off a lead-up run in The Vanity.

The latest all-in 2022 Australian Guineas odds at Ladbrokes.com.au have firmed on Barb Raider in from $71 into $31 and are available in full here.