Vangelic ran the ideal race to earn an invite into the inaugural $2 million The Invitation leading from pillar to post to defeat a quality field in Rosehill’s 2021 Golden Pendant results. 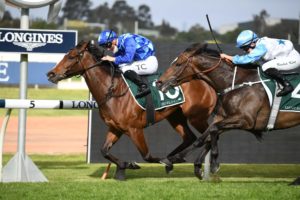 Vangelic put her hand up for an invite into the $2 million The Invitation winning the 2021 Golden Pendant. Photo: Steve Hart.

Second-up the Gai Waterhouse & Adrian Bott-trained Vancouver four-year-old presented fit and ready to fire in the Group 2 $400,000 Golden Pendant (1400m) and did not disappoint.

Aided by a perfectly-timed and executed ride by the in-form Tim Clark, the mare took advantage of her inside alley and after a lovely jump went straight to the front to lead the Golden Pendant field around.

Approaching the turn for home Clark quickened the pace, taking the sting out of the more brilliant sprinters in the mix, and Vangelic displayed her wonderful tactical speed over the final 600m that she ran in a sharp 33.4 seconds.

It was a nice, improved run off her first-up fourth at Kembla Grange in the Group 2 Sheraco Stakes (1200m) and saw her break a lengthy winning drought for her patient connections.

Vangelic won her race debut back in January of 2020 and, despite plenty of runs full of merit including her Group 1 Flight Stakes third that October and a Group 1 second in the Surround Stakes this autumn, she was winless since up until the Golden Pendant.

The all-the-way Golden Pendant winner had a neck to spare on the line over the Matthew Smith-trained Nimalee who was brave in defeat off her on pace run right on Vangelic’s heels throughout.

In an eye-catching third with her peak run still to come was the beaten favourite Entriviere from the New Zealand stables of star young Kiwi horseman Jamie Richards.

Declared to be in foal, Tavistock five-year-old Entriviere settled last in the run and was never going to catch the winner who ran that slick final 600m.

The last start Sheraco Stakes winner lost few admirers however ahead of bigger targets this campaign making up all the ground to come from last to third and round out the Golden Pendant trifecta.

Winning co-trainer Bott is now hoping Vangelic has done enough to secure a spot in the first edition of the mares’ only $2 million The Invitation (1400m) run at Royal Randwick on October 23 (Cox Plate Day).

“Very glad, the connections have been so patient with her,” Bott told Sky Thoroughbred Central.

“She was thoroughly deserving of that.

“We’d love to get into The Invitation. The plan was to come here today and we thought it was a nice race second-up for her where she could improve and getting the win today was crucial to state our case to getting that invitation.

“Hopefully she’s done that for us.”

Entriviere remains favourite at $4 in all-in 2021 The Invitation betting, while Vangelic can be found at $15.

Click here for the latest The Invitation 2021 odds courtesy of Ladbrokes.com.au.’