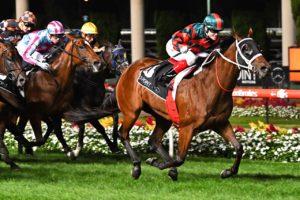 The four-year-old daughter of Exceed And Excel caught the eye first-up on Super Saturday at Flemington with a close third behind 100/1 winner Roch ‘N’ Horse in the Group 1 Newmarket Handicap (1200m) and franked that form at The Valley.

Fit second-up, she improved on a fourth in the same race behind Masked Crusader last autumn to score an upset win over 60/1 roughies Halvorsen (2nd) and General Beau (3rd) in the Group 1 $1 million William Reid Stakes (1200m).

All the money had been on the previously undefeated Oakleigh Plate winning mare Marabi ($1.70F), but she only managed to run two and a quarter-lengths back fifth with her stablemate Generation ($5.50) one better in fourth for the Maher/Eustace stable.

It was a brilliant performance by Waller’s former star three-year-old who settled well mid-field for jockey Craig Williams sitting just off a hot pace before producing a lovely late burst of speed to steal the show.

“Her Achilles’ heel has been getting around tight turning tracks,” Williams said after the race commenting on the newfound maturity of the William Reid Stakes winning mare.

“I rode her in a gallop before the Newmarket and saw how mature she is.

“Once we were in a straight line, I thought she was a superior mare because when she was a three-year-old she was so tough and tenacious down the straight.

“She won well and it’s great to see her back and to win another Group 1, which isn’t easy.”

Boom favourite Marabi was in the lead on the straight looking to take her flawless record to eight from eight, but she faded to finish out of the money unable to sustain her run after being on speed throughout.

Waller was thrilled to be trackside in Melbourne to see the September Run of old return to her best ahead of a likely trip to Adelaide for the Group 1 $500,000 Robert Sangster Stakes (1200m) on May 7.

“She was probably the best three-year-old of her season and it’s gone backwards since then, but it was a glimpse of September Run last start. She’s been bouncing out of her skin,” he told the media post-win.

“Tonight was 1200 metres and she really got to show her class. There’s a mares’ race in Adelaide for her.”

Visit Ladbrokes.com.au for all the best upcoming autumn racing odds including those on the 2022 Robert Sangster Stakes at Morphettville.